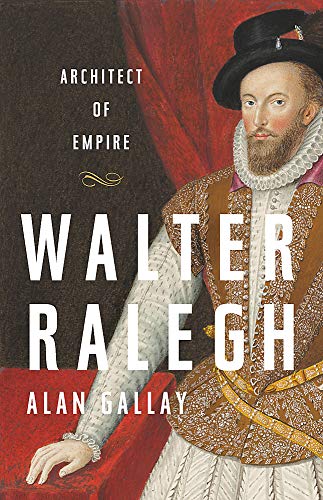 “Walter Ralegh is a brilliant biography of a true one of a kind.”

Sir Walter Ralegh (often spelled as Raleigh) lived a life unparalleled in European history. Born into a noble, yet impoverished family of Anglo-Norman ancestry in Devonshire, Ralegh spent his young years as a soldier serving Protestant armies in the Netherlands and France. From there Ralegh became the most successful courtier of the Elizabethan era and one of the Virgin Queen’s favorite persons. Ralegh was a true Renaissance man: poet, privateer and pirate, imperialist, soldier, politician, and man of science.

All facets of Ralegh’s life are wonderfully drawn by historian Alan Gallay. Gallay’s biography is more than just a portrait of one of the world’s most interesting men; it is also an exhaustive study of the first age of the English Empire. As Gallay shows, the story of English colonization of North America actually began in Ireland, where centuries of English migration and occupation reached its apex during the Tudor age. Ralegh was one of England’s most successful colonists in Ireland, and while his venture on the island of Roanoke (in modern day North Carolina) faltered and ultimately disappeared, Ralegh helped to transform the southern Irish province of Munster into a replica of his homeland in southwestern England.

If nothing else, Walter Ralegh corrects the assumption that he was a “failed colonizer” given that his experiment in North America never materialized. Gallay also goes to great lengths to show that “reading history backward from what occurred at its end” is a grave mistake in regard to the first English Empire. The imperialists Ralegh, Thomas Hariot, Richard Hakluyt, and John White “foresaw English colonists living among or very close to their Native hosts.”

In other words, in order for English North America to be the antithesis of New Spain, the earliest English imperialists envisioned a harmonious and biracial society founded upon Christianity and open trade. The fact that this did not come to be cannot be blamed on Ralegh, nor can the sins of the later British Empire be attached to Ralegh’s name either.

Tucked between brief chapters about such things as Ireland’s fishing economy during the Tudor period or the constant state of warfare between Spain and England, Gallay exposes fascinating pieces of Ralegh’s personality, interests, and the magical world he inhabited. Ralegh was a man of a wide intellect who, despite coming from a Protestant family and a loyal subject of the most vociferously Protestant nation in Europe, counted English and Irish Catholics among his close personal friends.

Ralegh not only settled persecuted English Catholics in Munster, but he also tried to settle them in North America as well. Ralegh also had an interest in Hermeticism, or a kind of Christian mysticism that intertwined alchemy with a universalist creed that accepted all religions on their own terms. When not enjoying some of the earliest cigarettes ever smoked in Europe, Ralegh busied himself in Ireland and in England with alchemical experiments, ethnographic and historical studies, or conversations with his Native American friends from the pre-Columbian American South.

Walter Ralegh is a brilliant biography of a true one of a kind. Ralegh, whose wealth and accomplishments did not stop the crown from imprisoning him several times in the Tower of London, lived during the days of William Shakespeare, Queen Elizabeth I, and England’s first golden age of exploration. Ralegh stood beside the giants of his age. Without him, and without that generation of Englishmen who sought to replicate the medieval civilization of their beloved home, today’s Ireland would be unrecognizeable and the great United States would not have its customs, language, laws, and culture—almost all of which can be traced back to England.