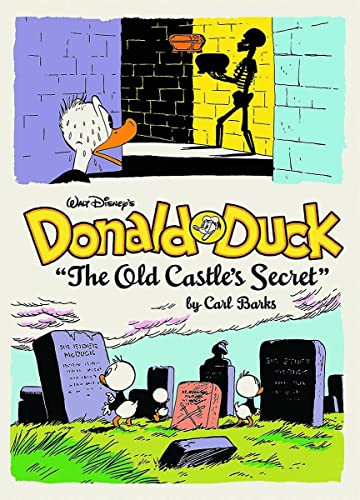 “Mr. Barks distills pure comedy down to its simplest form.”

Nobody can throw a tantrum like Donald Duck. His fists flailing against the sky, the sweat and spit flying from his quacking beak, the way his flat feet leave the ground throwing his back into a curve while his eyes close tightly in frustration, it’s a sight to behold. There is no tantrum like a Donald Duck tantrum.

That tantrum may be hilarious, and as so skillfully drawn by Carl Barks it certainly is, but watching that crazy duck go nuts is fun because we all know someone like that. We are able to relate to the duck because he is in some way us—at least when we were two.

Over 2,500 years ago Aesop taught us lessons through fables with anthropomorphized animals human characteristics. George Orwell showed us human ego unbound in Animal Farm by attaching greed, naiveté, and an unbridled lust for power to farm animals.

When it comes to comics, few writers were as skilled at showing us our frailties and faults in the same way as Aesop and Orwell as Carl Barks. Some came close. In the early days of newspaper comic strips George Herriman reveled in the insanity of love in Krazy Kat. In Road Runner cartoons Chuck Jones took on mindless obsession. But those are just slices, partial peaks into the human condition. They do not show us everything.

Carl Barks created an entire universe. He reflected society by giving us Duckburg, a town packed with ducks and chickens and foxes that reminded us of a lot of people that we knew.

Uncle Scrooge personified greed. Daisy Duck was woman incarnate (according to the standards of the day). Huey, Dewy and Louie are childhood and mischief at their most innocent. Gladstone Gander is the distracted genius who helps us live through what many of us fail to grasp, science.

And then there is Donald. Our own frustration with everyday life is manifested in his wailing cries of indignation and rousing fits of stunningly abusive temper. For all his crazy quacking, there is also a very tender and understanding side to Donald that gets lost in the cacophony and confusion.

He is also kind and his heart is as large as his emotions. Donald wants his nephews to be better. He wants to get Daisy the best gift possible. He wants to get some cash off of Uncle Scrooge, but only if he can behave honorably about it, for Donald is no thief.

He is like us. He is a bit complicated and he is also self-aware. Like many of us the Duck knows when he went too far. To a certain degree we all realize that we too have multiple identities. That’s why we love Donald.

As insightful as the characters are, they wouldn’t be so much fun to read if they didn’t make us laugh or entertain us. The idea that we may come to a realization about ourselves is not Mr. Barks’ primary mission.

Every single page of this new collection of classic Donald Duck stories is filled with silliness and slapstick and adventure. This new volume in the anthology of Mr. Barks work shows us westerns, jungle adventures, space travel and more. It covers a very fertile period that stretches across the year 1948.

The main stories, each over 30 pages long, almost seem to reflect what was popular in movie theaters of the time. The title story, The Old Castle’s Secret serves as his take on the horror genre. It is as funny and as wild as any cartoon ever created.

Inside the story are moments of both horror and hilarity. The shadows reflected off the wall as Donald and the boys approach a hidden chamber look like the best of Universal monster movies. These images of danger are balanced by individual panels of striking physical comedy that could have appeared in a Chaplin short or an Abbot and Costello feature.

In Sherriff of Bullet Valley Mr. Barks takes on the western genre. He exposes the clichés of the genre while making us laugh with the image of a tiny Donald atop a massive horse. For Darkest Africa he moves us into a jungle world where any second it is half expected for Tarzan to come swinging across a page. Originally released as a giveaway issue, the story has been unavailable for decades.

As skilled as Mr. Barks was with full length comic stories, he truly shines in a series of ten pagers. In these he is able to build a certain momentum that grabs you y the collar and doesn’t let go. This volume collects ten different stories and each is a howling delight.

When limited to a one-page story Mr. Barks distills pure comedy down to its simplest form.

Best Laid Plans opens with Donald serving the boys. He is tired of taking care of them so he feigns an illness, which should ideally cause the boys to want to take care of themselves. Naturally the nephews end up hurting themselves so Donald now has to wait on them hand and foot.

In seven panels Mr. Barks gives us comic gold that an average sitcom can’t seem to do in 21 minutes.

Fantagraphics continuing anthology of the work of Carl Barks brings some of the best work ever created in the world of comics back into the spotlight. Alongside Floyd Gottfredson’s early newspaper work on Mickey Mouse, the book is a reminder that ducks and mice weren’t always bland corporate spokes-animals.

Carl Barks was a true artist who could show us our own world while at the same time making us laugh uncontrollably at the image of a duck walking into a castle or calmly sitting on top of a horse ten times his size.