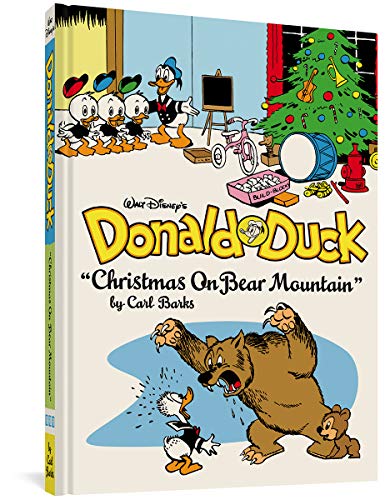 No matter what country you were in, the moment that Donald Duck appeared on screen audiences either burst into laughter or applause. In the golden age of cartoons, he was the king of Disney Studios. Mickey Mouse may have been the first out of the gate, but as he morphed onto a corporate symbol it was Donald who came to rule the box office.

Boastful, proud, easily frustrated, given to bursts of maniacal energy, and capable of flying off the handle at a moment’s notice, the pant-less duck widely entertained audiences. His nearly indecipherable squawk was imitated by millions, and even though we may not have been able to understand it, we always knew what he was saying.

This popularity translated easily into comic books. Titles with Donald on the cover are among the bestselling comic book issues ever. During the late thirties and into the forties the two main titles that he appeared in, Walt Disney’s Comics and Stories and Four Color, sold in the millions.

Of all the stories that appeared in these titles during this time, the work of one artist stood out. Fans began to identify these stories by saying they were done by the “The good duck artist.” Over time it was discovered that these stories were drawn and written by a former animator from the studios of Walt Disney, Carl Barks.

A new anthology of Carl Barks’ work in comics, Walt Disney’s Donald Duck: Christmas on Bear Mountain shows how right fans were when they encountered his stories. There is an energy, a style, a humanity to these stories that other titles don’t come close to.

The stories collected in this volume all appeared in comic books between May 1947 and January 1948. From the slapstick at the heart of Christmas on Bear Mountain to the very real adventure inside Donald Duck and the Ghost of the Grotto, these are some of the funniest, thrilling, and most entertaining comics ever written.

A spiritual brother to Montgomery C. Burns from The Simpsons, this early version of Scrooge McDuck is a lonely, misanthropic tightwad who is looking to have some fun at his nephew’s expense. It’s Christmas time, and he is willing to give a gift or two, but first Donald must pass a test.

Scrooge sets up an idyllic mountain retreat stockpiled with an endless amount of food and dozens of presents. Inviting Donald and his nephews to visit, he casually ads at the end of the letter “Don’t let the bears scare you too much!”

Little do they know that Scrooge has bought an incredibly realistic bear suit . . .
This sounds like a standard, one-note sitcom setup, but in the hands of Carl Barks this situation gains unique shades and colorings. At the heart of it all is the way that he fills the ducks with very human frailties and concerns, yet he never fails to let a sense of the absurd or silly disappear from it all.

Seeing the contents of the well-stocked refrigerator Donald offers Huey, Dewey and Louie a choice as to what’ll they have for breakfast “. . . fricasseed caviar, lobster newburg or filet mignon?”

The kids reply “A dish of oatmeal! None of that cheap stuff” With frustration bordering on anger Donald replies “You’ll get lobster newburg and you’ll like it!”
This is a classic routine that would have kept a vaudeville team in the money for years.

While Christmas on Bear Mountain is a classic cartoon-style story filled with slapstick and fun, Barks was just as capable of creating a solid adventure story that was anchored in the real world.

Donald Duck and the Ghost of the Grotto finds Donald and the boys renting a boat so they can gather seaweed off of the coast of the West Indies. Local legend tells of a ghost who reappears every fifty years to kidnap one little boy. Donald may not be spooked by this tale, but the boys sure are.

Driven by Donald’s greed they eventually set their boat on a reef hoping to get to a large bed of kelp. As they gather the kelp they find an old shipwreck guarded by a giant octopus. They also see signs of a man in armor who might be the kidnapper of legend.

An economical artist, Barks never wastes a panel. When the story climaxes with the appearance of the cross-eyed octopus blasting through the center of the shipwreck he holds the action to a half page making the event all the more spectacular.

In the next panel the octopus hightails it across a small inlet. The way he runs looks like a he is hiking up a skirt as he makes his way to safety. Simply freaking hilarious.

As with Fantagraphics' previous volumes in the series, the reconstruction and presentation is immaculate. Like a blu-ray disc for the comic eye, colors jump out and lines are crystal clear.

In this new collection we see Donald as a fireman, a farmer, a pilgrim, even a magician do his best to learn to waltz so that he can impress Daisy. He may fail, but he picks himself up every single time and walks right back up to the plate.

These stories are beautifully constructed for young and old alike. Barks’ work is the absolute best that a comic book can be.