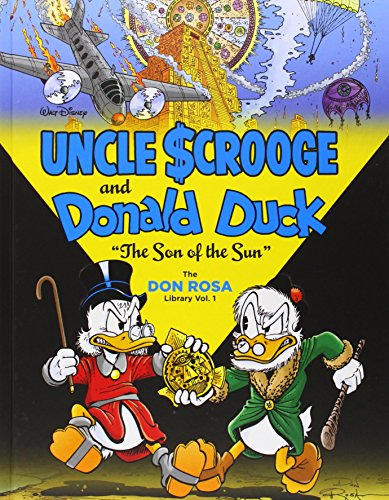 "The best combination of modern and classic Disney in one collection."

Inside Walt Disney Uncle Scrooge And Donald Duck: The Don Rosa Library Vols. 1 & 2 Gift Box Set (The Don Rosa Library) you can find stories that easily match the greatest adventures that Doc Savage, Batman, Indiana Jones, or The National Geographic and Jacques Cousteau have ever had.

The very first story takes us inside the tale of a lost treasure waiting to be found in Lima, Peru. In 1532 the invader Pizarro and his Spanish Conquistadors wreaked havoc trying to find gold. But they never did accomplish the goal. The Incas created an elaborate structure to hide it all.

It will take 500 years before Uncle Scrooge Donald Duck and the three Junior Woodchucks themselves, Huey, Dewey, and Louie are able to locate it. How did they manage to pull this off? With the help of Uncle Scrooge’s millions as well as that unlimited fountain of information and facts, The Junior Woodchucks Guidebook, of course!

Over the course of over 400 gorgeously colored pages artist and writer Don Rosa thrills us every time. Many of these stories are among the best comics and graphic novels created in the last thirty years.

Revered in Europe as one of the great Disney comic book writers and artists, in his homeland of America Don Rosa is known only to a handful of fans. Read one story in this anthology of his work and you will see why he is so beloved overseas as well as by fans and historians.

When these amazing stories were first released in the late eighties they received little attention or distribution in America. Speaking of that time Rosa reminds us that, “Disney comics were and are the world’s most popular comics but they had not been easily available in America for so many years. . . .”

Which means that, due to very limited distribution when they first came out, almost all of the stories in this anthology will be brand new to the young and old. This collection is a treasure trove of comic brilliance waiting to be discovered.

One of the reasons that Rosa’s work is both critically revered and downright fun to read is that he loved the characters and the world of comics before he drew his first Uncle Scrooge story. He is one of the first artists and writers to move from fandom into the world of professionals. When he did start it was if he was fated to do this.

Before he drew and wrote his first story, Rosa knew the history of Uncle Scrooge and Donald front to back. The enjoyment he feels in creating these adventures is right on the page.

A big part of the history of Uncle Scrooge and Donald Duck in comic books is the work of Carl Barks. During his time on the books he brought life and logic to the world of Disney characters that lived in Duckburg.

Like no one before him, Barks infused every single panel he drew with personality. As a writer and artist he took comics seriously giving his characters human dimensions and unexpected depth. He respected his material and created Uncle Scrooge, Magica De Spell and other memorable characters directly for the stories that he wrote and drew.

Barks was the rare talent who could simultaneously thrill people while making them laugh uncontrollably. Rosa understood and respected this. He studied the man’s work. From the beginning Rosa was fully committed to the world created by Carl Barks.

In the same way that Frank Miller brought life and energy to the characters of Daredevil and Batman in the eighties, Don Rosa did the same for the line of Uncle Scrooge and Walt Disney Comics.

The adventures that Rosa creates are considerably less dark and violent as anything Miller created, but the comparison is valid. Both Rosa and Miller look backwards to create something completely modern. In the process they give us stories that are timeless.

Just as Miller’s work on Batman was enhanced by his own respect for what had preceded him, Rosa, by revering the logic of Barks Universe, makes Duckburg as thrilling as Gotham. In fact, compared to the worlds of Marvel and DC, the Barks Universe is considerably less convoluted!

While he himself is critical of his artistic line, Rosa’s style harkens back to the earliest days of Disney animation. When he draws a bearded, upright dog as the curator of a museum the character could have easily have found a place in a 1933 Silly Symphonies cartoon.

Which is only understandable because at the time, the Disney house style was set in stone. Given this, Rosa’s take on the characters is bound to echo what preceded him. But his own, indefinable stamp is right there. There is a kinetic energy to every panel he draws. His reaction shots on characters are priceless.

It is the way he breaks a page into panels. It all somehow creates an individual style.

This set collect Rosa’s work chronologically, but he wasn’t creating alone. The coloring is spectacular throughout. As is that hidden skill of comic creation, lettering. Too much of each and any comic suffers. Too little and the effect of even the best story becomes minimalized. John Clark, Rich Tomasso, Susan Daigle-Leach, Gary Leach, and David Gerstein all contribute their art and skills to making Rosa’s work so exceptional.

Each volume also features notes on the stories, original art by Rosa as well as cover work he did for stories that he didn’t write.

Pick this up for a child, but don’t be surprised if you can’t put it down! Uncle Scrooge, Donald Duck, Huey, Dewey, and Louie and Disney Comics haven’t been this alive in decades.