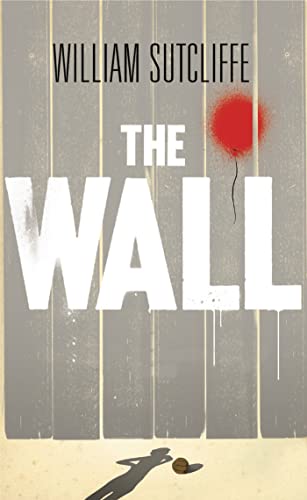 William Sutcliffe’s The Wall is a didactic pro-Palestinian “modern fable” about Israeli settlers and Palestinians living on opposite sides of the security barrier and an examination of the family dynamics of one dysfunctional settler family in particular, narrated by 13-year-old Joshua for readers of about the same age.

The words Israel, Israeli, Palestine, and Palestinian do not appear anywhere in the narrative, but the hilly setting with olive groves in “the zone” with new, spacious, uniform houses with red tile roofs on one side of the wall, and a densely populated older city on the other side whose inhabitants speak a different language makes the venue unmistakable. The contrast between conditions on the two sides is reminiscent of dystopian fiction but set in the present rather than the future.

Joshua, an only child, was born and raised near the sea. His father, whom Joshua idolized, died in military service, and his mother remarried Liev, a two dimensional caricature of a religious nationalist zealot—and the novel’s central shortcoming—who moved the family inland to Amarias, a new settlement in “the zone” abutting the security wall. Joshua despises Liev, who turns out to be an abusive monster, and since Josh is not an obedient conformist the feeling is mutual.

Joshua’s only friend is David, a boy with whom he would not spend time were he living anywhere else. One day they are kicking a soccer ball near a construction site when the ball goes over the site’s wooden fence. They have been told never to go into the construction site, and David goes home while Joshua decides to climb over the fence and retrieve his ball.

Inside the construction site he sees a demolished house with belongings still inside it, and he discovers the portal to a tunnel that leads to the other side of the security wall. Joshua cannot resist the temptation to explore the tunnel and see what is on the other side.

“Maybe I ought to work out the risks, remind myself of everything I’ve been warned about, take stock of what I have to lose. I know that’s what David would do if he was here with me, but that’s not the kind of person I am, and it’s not who I want to be, either. Mysteries are for solving, walls are for climbing, secret hideouts are for exploring. That’s just how things are.”

When Joshua exits the tunnel on the other side he is chased by a gang of teenage boys who clearly intend to do him harm, and although he is on their home turf he somehow evades them, knocks on a door, and is given shelter by a skinny girl his own age who happens to be home alone. Somewhere along the way Joshua has lost his sneakers, and the girl gives him her brother’s flip-flops, wraps his head in her father’s kafeeya so he will blend in with the locals, and leads him back to the tunnel.

He learns that there are indeed people on the other side of the wall who are hostile to people from his side, but that there are compassionate people there too. When he gets home his mother asks him about the change in footwear, but does not pursue the matter, which seems unrealistic. It is also unrealistic that having barely escaped from his adventure unharmed he would risk a return trip instead of reporting the existence of the tunnel to the authorities. Perhaps juvenile readers are more likely to suspend disbelief than adults.

Between Joshua’s first and second trips in the tunnel the narrative pace slows, but after that it picks up and becomes suspenseful. He develops a relationship with the girl’s father, whose name he does not learn—though hers is Leila. Learning of the deprivations the separation wall causes the people on the other side makes him feel even more alienated from Amarias and worsens his deteriorating relationship with Liev.

The novel’s ending is emotionally moving, but that and Mr. Sutcliffe’s often handsome prose are not enough to overcome the book’s shortcomings. A multiple perspective approach might have allowed the development of multidimensional characters, which are sadly lacking. Even readers who share the author’s point of view will as likely as not wish for a more nuanced, less black and white, treatment.

The Wall is cautiously recommended to 12- and 13 year-old strong readers and their well informed parents as an introduction to a discussion of Israeli settlements on the predominantly Palestinian West Bank, one in which addressing the novel’s flaws can lead a broader exploration of the subject. Fifteen-year-old average readers might not relate to the younger protagonist, and the book’s heavy-handed approach makes it inappropriate for adults.