The Walker: On Losing and Finding Yourself in the Modern City 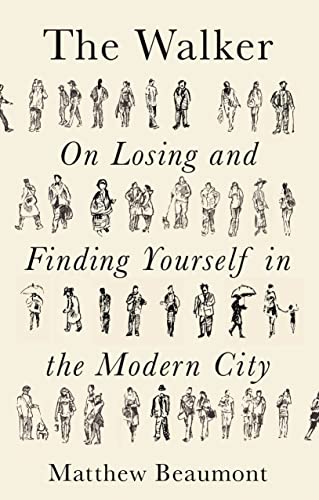 “To be born in the street means to wander all your life, to be free. It means accident and incident, drama, movement. It means above all dream . . .”

The Walker is a collection of scholarly essays, previously published in academic journals and anthologies (some of which were edited by Matthew Beaumont), that have been rounded up and slyly repurposed for the general reader in the guise of nighttime strolls through the modern metropolis in company with canonical authors and their fictional characters.

The title leads the reader to expect a book about the walking habits of writers, and their use of ambulatory characters as a literary trope in their novels. This expectation is reinforced when you read the promotional copy on the inside jacket flap. “Pacing stride for stride alongside literary amblers and thinkers such as Edgar Allan Poe, André Breton, H. G. Wells. Virginia Woolf, Jean Rhys and Ray Bradbury, Beaumont explores the relationship between the metropolis and its pedestrian life,” the copy proclaims.

A few pages into the first chapter, on Edgar Allan Poe (is Poe a modern writer?), the reader discovers that the book’s title and jacket copy are somewhat misleading. Beaumont is not offering an account of Poe’s walking habits, or even the walking habits of his characters, but developing a theory, as a literary and cultural critic, of how urban walkers in literature convey various states of alienation and psychological distress produced by life under industrial capitalism. The tip off you have entered the realm of Marxist literary theory and will not be accompanying Virginia Woolf or Charles Dickens on walks around London comes in the opening sentences of the Introduction, in which Beaumont asks, “What are the politics of walking in the city? What are its poetics?” (Later, for good measure, Beaumont tosses in “the semiotics of walking.”)

In his analysis, Beaumont removes the urban walker from the physical realm of the idle stroller whose feet are in contact with the ground and whose senses are engaged with the material world around him (all Beaumont’s walkers are male), and lifts him into the airy realm of a literary archetype, the flâneur, whose passage through the metropolis becomes a metaphor for various forms of alienation from modern industrial society. In elaborating his theme, Beaumont shows off his fancy footwork as a well-informed cultural critic who can quickly skip from literature to painting, to philosophy without missing a step.

Beaumont explores eight variants on the theme of the alienated urban walker through his discussion of the fiction of notable 19th and 20th century authors, beginning with Edgar Allan Poe and ending with Ray Bradbury. Most of the writers are British. Each variant is classified under a heading that points to a particular feature of our urban malaise. He identifies various forms of alienation and psychic disturbance, brought on by the metropolitan environment, that beset the fictional characters.

Poe’s walker is a convalescent spending the evening in a London café and watching through the window the crowds of pedestrians passing in front of him. The convalescent is an observer who exists in a kind of limbo between sickness and health, a transition state that makes him passive, disengaged. The implication that Beaumont reads into this condition is that urban dwellers are suspended between life and death, cut off from the life force, surviving but unable to live fully. Beaumont connects the convalescent to the tradition of the Romantic hero. He also finds visual correspondence in de Chirico’s paintings of barren cityscapes dominated by cold and menacing geometric forms.

Dickens’ character Master Humphrey from the novel The Old Curiosity Shop is a nightwalker who avoids the streets of London by day because of a physical disability that has made him an outcast. Like the convalescent, he is damaged, and has no comfortable place in the social scheme that plays out during the daylight hours. On one of his nightly excursions he encounters Little Nell, an innocent child who has lost her way and asks for Humphrey’s help in finding her home. This meeting of two strays (the chapter is titled “Going Astray”) poignantly captures the sense of homelessness that underlies the restless anxiety that many urban dwellers feel. No one is quite at home in the city.

Psychological dislocation afflicts Julian West, the central character in Edward Bellamy’s utopian novel Looking Backward. West is a time traveler who has journeyed to the future and lives in a constant state of disorientation, carrying a double identity that Beaumont somewhat opaquely refers to as “psychogenic fugue.” Simply put, West is neither here nor there. Like the convalescent and the nightwalker, he exists in a suspended state, at home neither in the city nor in himself. He has disappeared.

So has Griffin, the invisible man in H. G. Wells’ famous novel. Griffin is an albino, marginalized by his abnormal condition, much like the convalescent and Humphrey. Griffin’s attempt to gain power over others by comingling among them in an invisible state Beaumont likens to the Promethean aspirations of scientific man grasping for power over nature. Beaumont sees Griffin as “a casualty of modernity who is forced to negotiate his outsider status in part through the politics and semiotics of walking.” Go figure.

The book includes chapters in a similar vein on fiction by G. K. Chesterton, Ford Madox Ford, Virginia Woolf, Jean Rhys, and Ray Bradbury. In the discussion of Bradbury’s short story “The Pedestrian,” Beaumont comes the closest to linking the walking habits of a writer with the pedestrian experience of a fictional character. It might have been tactically smart to place this chapter near the front of the book, because of all the chapters it speaks most directly to the contemporary reader.

Curiously, the most interesting chapter in The Walker does not take up a literary work. Its subject is the big toe, which Beaumont cleverly, and somewhat humorously, argues is the anatomical feature that makes homo sapiens human, and sets him apart from all other mammals. As such, the big toe marks both the beginning of the human evolutionary story and also the beginning of civilization, since his bipedal method of locomotion freed man to use his hands to develop tools. Since the big toe enables bipedal walking, why not start a book about walkers with a discussion of the big toe, instead of burying it in the middle of the book?

A word about Beaumont’s style. Beaumont is an academic, an English Professor at University College London. Not surprisingly, he writes in a highly academic language that, while usually accessible and sensible, sometimes borders on the self-consciously irritating, and occasionally becomes incomprehensible. Here is a sample from his chapter on Virginia Woolf’s Mrs. Dalloway. He is writing about the relationship between the consciousness of a spectator and the object of his attention, the spectacle. “This mutual interpenetration of inner and outer comprises an exemplary experience, in the urban imaginary limned by modernist art and literature, of the reciprocal relationship between spectacle and introspection.” If you can glide comfortably from one end of this sentence to the other confident that you know what you are reading, you will have no difficulty getting through The Walker. But keep a dictionary handy to help you plow through words like “interpellate,” “hypnagogic,” “hypnopompic,” “tessellation,” “ekphrastic,” “apophatic,” and “triskaidekaphobia,” that Beaumont uses to spice his exposition.

The book closes with an Afterword in which Beaumont describes two personal experiences of nightwalking. One takes place in London, the other in Paris—two of the world’s most glittering culture capitals. Both outings bring Beaumont face to face with the morbid and violent underpinnings of modern industrial capitalism, and reveal the ideological framework that surrounds his cultural criticism. There’s no denying that our cities are broken places where most people struggle to live meaningful lives, and many people struggle simply to survive. But if you are a reader looking for an upbeat take on city life, pick up Alfred Kazin’s A Walker in the City or Orhan Pamuk’s Istanbul.