A Walk Along the Beach: A Novel 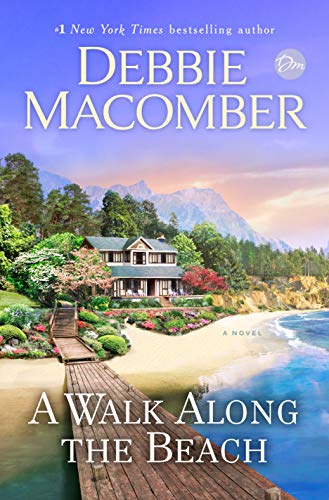 Willa and Harper Lakey are as close as two sisters could be, even considering their dissimilar personalities. Willa is the middle child in the Lakey clan, and when their mother unexpectedly dies when they are young, Willa becomes the head of the house. Older brother Lucas joins the service to get away from their now dysfunctional family with their father who cannot cope with losing his wife and instead turns to the bottle. When their home is foreclosed on, the sisters are old enough to be on their own and share an apartment in Oceanside, WA. Willa opens a coffee shop called, Bean There, and Harper teaches yoga and exercise classes a few blocks away from Willa's café.

Suddenly, the unthinkable happens: Harper becomes ill and is diagnosed with leukemia. This disease takes its toll on her, but Willa stays by her side constantly, offering comfort and reassurance as she battles the debilitating side effects of chemotherapy.

For three years Harper remains in remission, yet the threat of a recurrence hangs over their heads like a fog. Now, seeming healthy and fit, Willa feels she can finally breathe. Harper often comes to Willa's shop for coffee and sister talk, and one day she is there, she spots a good-looking guy enter and place an order from Willa. Harper later tells Willa he likes her, but Willa brushes her off, thinking men would be more interested in Harper than her. Harper, outgoing, vivacious, and beautiful, whereas Willa envisions herself as an introvert and a plain Jane.

This man seems to show up almost every day and while Willa is taking a break with her sister, Harper asks him to join them, which he does. Willa notices he is attractive but does not set her sights on him believing he could only want Harper. Harper chats with him, learning his name is Sean O'Malley, while Willa sits tongue-tied and embarrassed, knowing Harper's ploys at trying to fix them up.

"Harper shot me a look that said I should make my move.

"Yeah, right. My little sister had yet to realize I had no moves. Our mother died of a brain aneurysm when I was thirteen and in junior high, so I'd completely missed out on those carefree teen years. As best I could, I'd taken over the duties at home, cooking and cleaning for our older brother, Lucas, Harper, and my dad."

Not wanting a relationship, Willa wishes Harper would find the right one for herself, but her sister is famous for dating guys for a few weeks before dumping them. Why does she do that?

Tired after long days at the café, baking, and serving customers, Willa finds her relaxation by taking walks along the beach, breathing in the fresh air, and centering herself.

"The ocean had always been my solace. The sound of the waves as they crashed against the shore reverberated in my head, offering me peaceful contentment. I once heard it explained that being near the ocean, with the surf and the swirling waters, was like being tucked inside a mother's womb. I wasn't sure if that was scientific or not, but in some ways, it made sense. The rhythm of the tides, the predictability of it all, offers reassurance and a certain sense of security."

When Harper announces she is planning to climb Mt. Rainier with a group she is working out with Willa becomes frightened, knowing this could be dangerous, and she pleads with her to not go in this venture. Harper informs Willa they are having a practice run over the weekend and she promises if she cannot accomplish this, she will bow out of the hike.

Much to Willa's relief, the trial hike takes a toll on Harper, and she must give up her plans. She argues with Willa then states she is moving out, insisting she is tired of being mothered by Willa. Willa dearly loves her little sister and is fearful of her health so how can she not mother her?

As Sean frequents Willa's café more often, he manages to bring her out of her shell, and they become friends. He is easy to talk to, and she looks forward to his visits and starts to care deeply for him. As a busy professional photographer, he gets many assignments out of the country, leaving for long periods of time. It breaks Willa's heart when he's away, but while he's on a shoot in Bolivia, she learns something about his history he never disclosed to her, giving her second thoughts about him. After his return, he becomes deathly ill, and it is determined he is suffering from typhoid fever. Who would believe he'd be struck down by such an archaic illness? Willa remains close by caring for him until he recovers, knowing she must discuss with him the things she learned about his past.

Meanwhile, Lucas announces he plans to marry his fiancé around Christmas time, and both sisters are excited and eager to help with preparations. Then Harper becomes deathly sick and is rushed to the hospital. Willa fears how their father will react when he hears this news. He couldn't handle their mother's passing, so will he go back to drinking upon hearing of Harper's relapse? He will need Willa, too, to help him through this time.

Sean is away on another job in the Philippines when Harper is admitted for treatment. Willa stays with her night and day, yet she's hurt and disappointed by his absence. She wants him with her now more than ever, but it appears his career means more to him than she does. With this thought in mind, she decides to tell him they cannot have a future. As much as she has come to love him, they can’t be together if she can't depend on him.

Willa and Sean each voice their point of view and air their anguish in differing chapters, which adds depth to the tale knowing the feelings of both characters. Though Willa is a strong and independent woman, she needs to know she can rely on Sean, and he must prove to her he will not let her down. This highly emotional read is a hard-to-put-down page-turner, yet, throughout all the heartache, the strength and love of family shines through, making this a bittersweet tale.