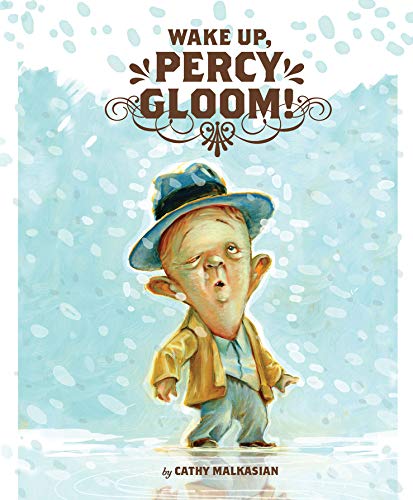 When Percy Gloom falls asleep he is not sure how long he will be out. Each time he rises he is unsure as to how long he has been out. Sometimes it is a year; sometimes it may be 200 years. Each time he awakens he has to find what remains of his previous waking hours and build something new.

The world he travels, as laid out by writer and artist Cathy Malkasian, is a softly penciled, shaded landscape with mostly rounded edges that is a mixture of browns, light blacks and shadows.

While the world Ms. Malkasian brings to life may appear surreal to some, it is actually as real a mix of rolling hills, harsh train stations, rolling seas, swirling forests and manicured landscapes as anything we see in our own lives.

As Gloom sets out to find his missing mother he walks with a firm belief that what he has lost during his prolonged slumber is still out there for him. Inside his hat he carries a reminder of what was best from his last waking round, a headband given to him by the beautiful Miss Margret. In his darkest moments, times filled with boredom or frustration, the presence of this reminder fuels him. A precious talisman that means nothing to anyone else but for him is his world.

A quite fable of immortality, hope, longing and singing goats, Wake Up, Percy Gloom captures the wonderful and unpredictable nature of our lives. It reminds us that much of what we are is actually the connections, both good and bad, that we share with others.

Like the best of fables much of what Ms. Malkasian creates is deeply rooted in the eternal traditions of storytelling. When his mother has to tell her friend Horace something uncomfortable she wears the mask of a bird. Much as a shaman once did when delivering messages from the other side.

There is a book containing hints of the future. A book once written as a lark has suddenly become the word of the land. Its followers justifying their selfish actions by what they believe they read in the book. Using the book as proof of their own vision, they refuse to acknowledge the idea behind the book’s creation.

Much of Gloom’s journey is in the company of a governmental bureaucrat who believes that he can control the skies. He takes Gloom on a train ride that is as false as the promises made by any corrupt politician. Driven by his self importance the official finds that fate and nature can sabotage the best of men. And yet, after all he sees and experiences, in the end he stands in defense of his own delusions, reluctant to see what the universe may have shown him, somewhat proud of his accomplishments.

When he and Gloom finally get into a fight they literally kick each other in their respective bottoms until they collapse in exhaustion. Each man filled with pride at the fact of what they have done. The battle in truth accomplished nothing. Except maybe a couple of men with newly sore bottoms.

Like Aesop, Disney and other ancient storytellers, Ms. Malkasian has animals sing and sometimes talk. Nature bears the fruit of living and in one case; a tree literally creates ready-made furniture. In another passage fireflies arrive from nowhere to light his way so that Percy can read the instruction on a box of muffin mix that his mother has left him for when he awakes.

Gloom walks through the story with a strength and dignity that belies his outward appearance. He holds the belief that every day matters and the next one will be even better. His dreams of Miss Margret’s attention propel him forward with strength inspired by true love.

In a graphic novel filled with exceptional art, lush dreamscapes and characters of rich beauty, Ms. Malkasian brings simple moments to life that show us the depth of someone’s heart.

Traveling with Percy’s mother, Horace speaks about a reoccurring dream. He remembers being on his grandfather’s farm and being small enough to sit in a bucket. As he sits a sound begins to form in the distance. Horace the baby looks around in wonder as trees begin to fatten with apples and begin to fall from the sky.

Reaching for the heavens, his arms stretched out in pure joy, baby Horace screams with delight as the apples fall to earth through the evening. Together he and his grandfather sit laughing for what seems hours. The acceptance of life and the beauty it can give us if we reach out and take it in . . . the look on the baby’s face is joy incarnate.

Ms. Malkasian’s experience in the world of animation and cartooning gives the story a highly unique flow. She is able to cross time and manipulate narrative in such a way that we never feel lost, but she challenges us with overlapping stories and by allowing characters to move across a single panel with multiple thoughts.

Her expert use of light, such as the shadows that are cast when apples fall to the ground, brings a familiar sense of the real so that we feel as if we are part of this strange and compelling world.

With timeless elements of tradition, science fiction, philosophy, and the look of a cartoon that may have once appeared exactly once during the early experimental days of Nickelodeon, the artist fills every panel with joy.

Wake Up, Percy Gloom reminds us that every single moment is important because at any second apples may bloom and fall from the sky.