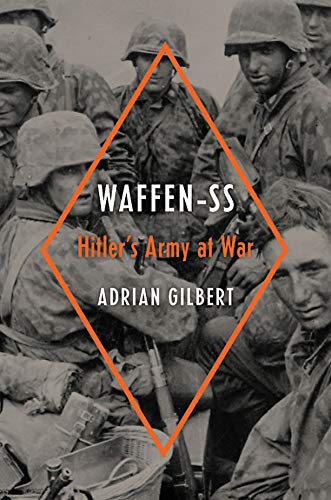 “should serve as a stark warning of the deadly combination of extreme politics and military prowess . . .”

The Waffen-SS occupies a unique niche in the history of Adolf Hitler’s Third Reich.  The combat arm of the Nazi Party’s paramilitary wing, the Waffen-SS has often been labeled the most lethal fighting force of World War II. However, it has also achieved notoriety for its role in war crimes and atrocities against civilians and prisoners of war that is also unmatched.

In this new history, author Adrian Gilbert provides a takes a fresh look at the private army of Henrich Himmler, the second most powerful man in Nazi Germany. From its genesis as the private bodyguard and ceremonial force for Hitler, the Waffen-SS grew to a force that peaked at over half a million men in the summer of 1944, serving in nearly every German theater and acquiring an unmatched reputation for aggressiveness in the offensive and tenacity in defense.

Himmler was determined to build his own private army, a feature of the Machiavellian politics of the Third Reich in which all of Hitler’s top lieutenants tried to establish their own fiefdoms by establishing elite forces answerable only to them. In the case of the Waffen-SS, Himmler drew tremendous resources away from the regular German Army to ensure his hand-picked units received the best equipment and training throughout the entire war.

When war broke out in 1939, Gilbert notes the actual combat experience of these so-called elite troops was a painful learning process, and their initial performance in Poland and France received a great deal of disdain from the German Army leadership.

However, Himmler’s unwavering support and ability to curry Hitler’s favor ensured the continued growth of the Waffen-SS. When the campaign in Russia began in 1941, these units really began to perform as well or better than their Army counterparts. In particular during the Kursk offensive of 1943, the Waffen-SS Panzer divisions were given a primary offensive role and performed exceptionally well, mauling nearly all the Soviet forces in their path.

On the Western Front, the Waffen-SS also gained a reputation as a fearsome fighting force, highlighted during the ill-fated Allied Operation Market-Garden, when two Waffen-SS Panzer divisions undergoing rest and refit after the near annihilation of German forces during the Allied sweep across France found themselves almost on top of the British 1st Airborne Division attempting to secure the Arnhem Bridge. In nearly two weeks of fighting, the understrength units almost single-handedly stopped the Allied offensive and derailed the Allied efforts to perhaps end the war before Christmas 1944.

As the war progressed, Gilbert provides some interesting subtext about the efforts to maintain the combat readiness of these units, examining the multiple compromises to Nazi political and racial dogmas made during the course of the war to replace the heavy combat losses suffered by these units.

By the end of the war, the Waffen-SS took in volunteers and conscripts from numerous countries previously considered non-Aryan, including France, Belgium, Estonia, Latvia, Bosnia, and Hungary to keep their divisions combat ready, attempting to cast their war effort as a crusade to save Europe from Soviet Bolshevism. The hypocrisy of the Nazis and their theories of racial purity in accepting large numbers of non-Germans into the Waffen-SS truly shows the effect from years of combat against the superior logistical and manpower resources of the Allies.

In addition, Gilbert does not shy away from the dark side of this force as well, describing the support the Waffen-SS gave to German death squads massacring Jews and other enemies of Hitler’s Third Reich during the brutal fighting in the Soviet Union.

The less well-known efforts of Waffen-SS units to defeat partisans and guerillas behind the lines in Russia and Yugoslavia are also covered in great detail by Gilbert, who notes the slaughter of civilians and destruction of entire villages were commonplace in the Balkans as the partisans of Marshall Tito and the German military fought a no-quarter given conflict.

On the Western Front, the Waffen-SS conducted several abominable atrocities against Allied prisoners, murdering captured Canadian soldiers during the fighting in Normandy and perpetrating the Malmedy massacre against American prisoners during the Battle of the Bulge.

Finally, Gilbert describes the ultimate battle for those SS troops who survived the war, the clash over history. With the rise of the Cold War almost immediately after the Nazi surrender, the Waffen-SS veterans began a concerted effort to cast themselves as noble warriors fighting against communism on the battlefield, minimizing their conduct in both the Nazi racial extermination efforts and atrocities against Allied POWs.

They have been somewhat successful, as the complex relationships of Eastern European countries with post-communist Russia muddies the role of the Waffen-SS even more in European memory and politics. As this volume makes clear, the Waffen-SS was not merely a conventional fighting force, but an integral part of the Nazi Party’s vision for remaking Europe in their image, no matter how many undesirable people needed to die. It should serve as a stark warning of the deadly combination of extreme politics and military prowess.