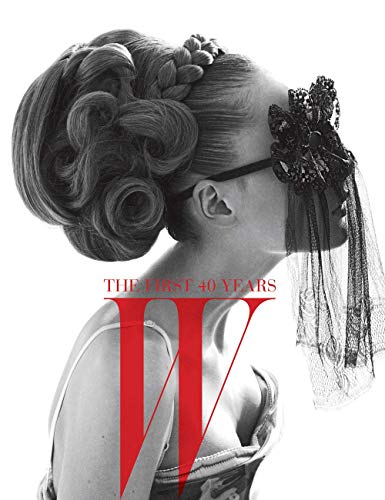 “W was, for so many years, a fashion bible as well as the bitchiest publication out there and sadly, none of that is captured within this new book.”

First things first. The one aspect of this book that cannot be ignored is its physical presence. W: The First Forty Years is a huge and exquisitely produced coffee table book with an incredible photographic archive.

The foreword by John Fairchild discusses how the publication came about as well as its raison d’etre within in the worlds of fashion, society, and media. Mr. Fairchild sets the stage while Mr. Tonchi quickly and rather selfishly tends to ignore the first 30 years and focus on the last 12.

Close readers of W since its inception would have to admit that the once glossy publication with its declarations and pronouncements and its stellar “cast of players” has been turned into some celebrity filled magazine with very little relevance in the general scheme of fashion and society today.

The declared foundation has eroded if not completely been obliterated—all done by the passage of time and a changing fascination and shift of the readership and by the succession of editors.

Another great factor in the transition is that the “cast” of the once vaunted publication has for the most part died off and left us with poor substitutes for the grande dames of society. One can hardly equate Paris Hilton with Babe Paley or J Lo with Gloria Guinness!

Once again, it must be said that the archive of photographs and articles pre-2000 is disappointingly sparse while post-2000, the images and features are abundant. W was, for so many years, a fashion bible as well as the bitchiest publication out there and sadly, none of that is captured within this new book.

No wonder Mr. Fairchild, the previous editor, was less than pleased with Mr. Tonchi during the anniversary festivities. For those who will recall the” In and Out” lists, one of this year’s entries might read as “John Fairchild’s W . . . IN . . . Stefano Tonchi’s W . . . OUT!”