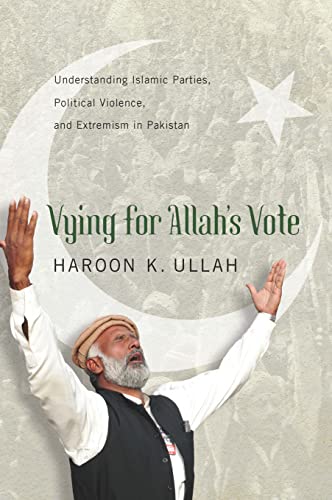 Haroon K. Ullah’s work focuses on democratization, security studies, and political party dynamics. He has a master’s degree in public policy and international development from Harvard University and holds a PhD in political science from the University of Michigan. Ullah is currently a staff advisor the US State Department based in Islamabad and was a member of the late Ambassador Richard C. Holbrooke’s policy team on Pakistan and Afghanistan.

Further, this relationship is complicated owing to Pakistan’s possession of nuclear weapons about which there is a question of both the stability and security of these weapons as well as Pakistan’s perceived willingness to provide off the shelf nukes to Saudi Arabia in response to the Iranian nuclear threat.

Ullah develops his argument in this book by noting that there is a moderate—extremist continuum (that can also be referenced as a “Sharia —Secularism continuum”) whereby the impact of Islamist parties in Pakistan and elsewhere with respect to the “Arab Spring” can be assessed and evaluated.

This model, as the author notes: “Is based on the premise that Islamist parties are not solely driven by ideological principals and that, given the right incentives, they can moderate their policies.”

What this in fact does according to the author is create a potential disconnect between what these parties do and say while running for office and how they act when governing.

This is further complicated by the potential differences resulting from how these parties govern in provincial roles versus that of how they govern nationally in Pakistan.

Ullah describes this as follows: “I argue that in the Pakistani context, participation does not necessarily lead to moderation but to instrumentalism, in which such concepts as the enforcement of sharia are less of a goal in themselves but rather a means to an end.”

What this does is create a potential and perceived “outsider” status for Islamist parties in the Pakistani governmental framework. The author cautions that: “The Islamist’s outsider status does raise doubts among pragmatic Muslim voters over whether Islamist politicians will have the ability to make good on their campaign promises if they are elected.”

Also as noted by Ullah: “Given the limitations of purely Islamist ideological positions and policies for political success, it is not surprising that Islamist parties have shifted between moderate and extreme postures across the course of their development.”

Finally, the author argues: “These moves have been driven by political expediency rather than by ideological imperatives.” One could only wish that this could become the modus operandi of the Tea Party ideologues in the United States political context.

What are the implications here for assisting Westerners in developing a better understanding of the Pakistani governmental context? The author notes the following:

• “Islamic parties are not a recent development in Pakistan or an outgrowth of militant Islam; instead they are foundational to the nation itself and its democratic political process.”

• “Rather than pushing Islamic parties further into the arms of extremists through policies of suppression, Western powers would be wise to exploit the tensions between these groups, and look for points of shared interest with Islamic parties that may serve as the basis of dialogue and cooperation.”

• “The United States should make clear that its problem is not with madrasahs but with murders.”

• “ Although I strongly argue that it is counterproductive for the United States to view all Islamists as either ideologically intransigent or wholly opposed to U.S. interests, some individuals or local offshoots are indeed so closely linked to militant Islamism that there is no longer light between them.” Therefore, “In these cases targeted efforts to disempower these political actors may be required.”

The beauty of Dr. Ullah’s thesis lies in his ability to distinguish between those Islamists in Pakistan and elsewhere who are interested in governing in a modern emerging world democratic setting as opposed to those who rely purely on ideology buttressed upon little apparent interest in governing unless they control all the reigns of power. The former approach is pragmatic and positive. The latter is a delusion.