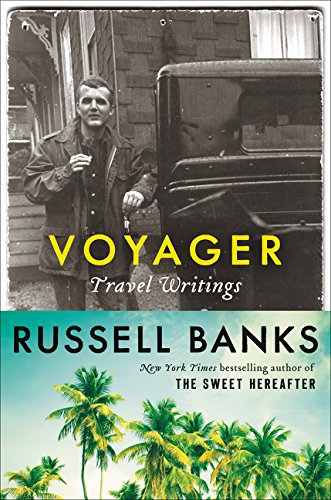 Novelist Russell Banks admits to having a serious case of wanderlust for the better part of half a century. Now 76, his international reputation as a writer in the grand tradition is secure. He brings us in his latest book of essays, Voyager, a revealing memoir of his far-flung journeys that morphs into a reflection on his life’s intimate passages.

Banks is a master of detail and travel brings out the best and painful in him. Whether writing about a languid, months-long island-hopping jaunt through the Caribbean with the woman who was to become his fourth wife or interviewing Castro and diving for lobsters with Cuban sailors while drunk, what we get from Banks is his best effort to muse on the complicated nature of life and love.

Voyager simply bubbles with Banks’ prose. His description of Sint Maarten is typical of his wit: “Like St. Thomas, Sint Maarten was the most populous of its sibling isles and the one most given over to sating the desires of package tourists and cruise ship passengers. On those strictly commercial terms, it was success story, a happy hooker.”

Banks takes on the pleasures and deceptions of travel with gusto and thought, and engages readers to join him in the Everglades, Scotland, Alaska, the Himalayas, the Andes, Senegal, and throughout the U.S., reflecting on his mistakes and rejuvenating his spirits. In the process we, too, are inspired. His thoughtfulness and indefatigable curiosity are infectious, uncompromising and unapologetic.

In the end, this lifelong explorer turns out to be on a quest for self-discovery, not escape. Through all his longing for the sensual, cryptic, passionate, and outlandish, what Banks discovers is not only new friends, new conquests, but himself in remarkable clarity.

This is apparent as he recollects on a fellow mountain climber with whom he battled up to 18,195 feet, “The image of that sturdy septuagenarian with the climbing poles whom I’d come face-to-face with—the original old goat as I now thought of him—stayed with me until the end of the climb and beyond. He had been my nemesis in the beginning, my doppelganger, my feared self, a man too old to be out there climbing the Himalayas in the company of a much younger person, a beautiful young woman, for God’s sake. Now, however, I admired that old guy and I hoped I was a little bit like him. All he was doing was taking the measure of his absolute physical limitations, marking the nearness of the end of everything, getting as close to that leap into the void as he could while still standing on the planet. He was no old fool. And if he wasn’t, then I was no old fool, either.”

Russell Banks is a many of many exploits, many accomplishments, and many words. Yet his journeys have begun and ended in his very own heart and soul. And therein they have rewarded him. And us in the process.