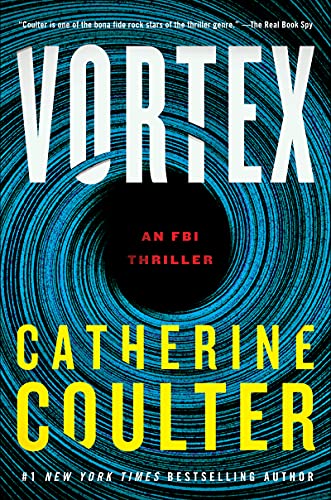 “On the whole, Vortex is perhaps not Coulter’s best effort. There are places where it feels as though the characters don’t work hard enough at getting the information they need to solve their respective mysteries.”

In her new book, Vortex, Catherine Coulter tells two stories at one time. Her main characters are her FBI couple, Dillon Savich, and his wife, Sherlock. And that is as close as the two stories get—one is a crime to be solved by Savich; the other a crime to be solved by Sherlock. Through 400 pages, the stories never collide, meet, pass, or otherwise come in any contact.

Coulter, a prolific writer, is known for her FBI series in which she has a number of different characters. In Vortex, her leads, Savich and Sherlock, find themselves each battling different criminals. And yet their roles feel secondary to the primary characters in each story—Mia and Olivia—as if they are there only to provide some law enforcement backing.

In order to keep the reader’s attention on two parallel stories, Coulter has to move back and forth from one to the other without losing the reader’s interest. If this is a writing style she has developed throughout her stories, her collective fans may not find this distracting, but for the reader who is not familiar with Coulter’s work and expects the stories to meet and tie up neatly at the end, they will discover this is not the case. Each story is a tale unto itself—the only joining is that the two FBI agents are a married couple. One gets that sense of not quite enough of either story to complete a full novel.

The story starts with a crime committed by two college boys who attempt to roofie a female student, Serena Winters. Their plan goes horribly wrong when the girl is murdered, and they bury her body where no one can find it. Or so they think.

The story moves to seven years later, and Mia Briscoe is a full-fledged reporter for The Guardian, a New York paper; she is assigned to interview Alex Harrington, the young, wealthy mayoral candidate for New York City.

The connection between Mia and Serena becomes clear early on as Coulter explains they were best friends in college, and Mia has never gotten over Serena’s disappearance. As she begins her research on Harrington, she soon discovers that he may be connected to her friend’s disappearance, and finding the truth becomes her focus.

Sherlock becomes involved about halfway through this story, and her involvement feels minimal, since Mia takes the lead in learning the gruesome facts through her many interviews with Harrington’s acquaintances. Sherlock’s role feels more like a character who has all the right connections to trip up Harrington.

Coulter brings in the second story when Savich finds himself confronting international criminals who are trying to assassinate a CIA agent, Olivia Hildebrandt, as they search for a mysterious flash drive that could bring down a major international crime boss.

Hildebrandt has just returned from an assignment in the Middle East with a team of agents, including her lover, Mike Kingman, who has acquired the flash drive and has made himself scarce until he can determine who in the CIA gave up him and his team to terrorists and who he can deliver the drive to, safely. At the same time Olivia is attempting to find Mike before the criminals find him. As with the Mia story, the primary character is not the FBI agent (Savich) but the CIA agent, Olivia.

As each story progresses, the facts rise to the surface, and Coulter creates the requisite number of tense climactic ending scenes.

Coulter’s character development is good although her characters on the good side are always beautiful; on the bad side swarthy and unattractive—a reality perhaps not quite so real.

On the whole, Vortex is perhaps not Coulter’s best effort. There are places where it feels as though the characters don’t work hard enough at getting the information they need to solve their respective mysteries.