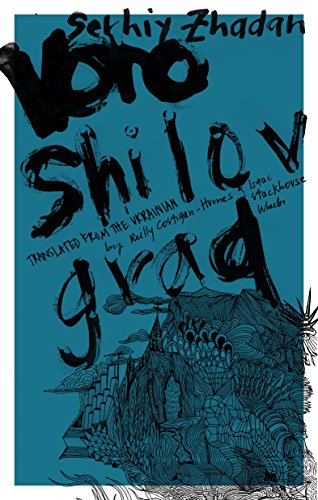 “Recommended reading for those looking for a more lighthearted take on a region riven by suffering and war. Voroshilovgrad is yet another example of Ukraine’s cultural uniqueness and its post-Soviet literary scene.”

One day Herman, a big city marketing expert, receives a phone call from his brother to take over running a gas station in Luhansk, his hometown in the Donbass region of Ukraine. During the Soviet era, Luhansk was known as Voroshilovgrad. Written by Serhiy Zhadan, Voroshilovgrad was released in the Ukraine in 2012. Deep Vellum Publishing came out with an English version in 2016, translated by Isaac Stackhouse Wheeler and Reilly Costigan-Humes. It is an off-kilter road novel in which strangeness and danger lurk around every corner. This isn’t the usual garden variety novel involving a protagonist returning to his hometown.

Herman takes a bus to Luhansk. Author Zhadan captures the bizarre atmosphere by describing the passengers. “There were no empty seats. The souls who inhabited the bus were a languid bunch. There were women in bras and sweatpants with bright makeup and long fake nails, tattooed guys with wallets hanging from their wrists, also in sweatpants and Chinese-made sneakers, and kids in baseball caps and athletic uniforms holding bats and brass knuckles.” When he does finally arrive in Luhansk, he has to manage the gas station to the best of his ability. This involves negotiating with the local “corn baron” and dealing with the gas station employees Kocha and Injured. The corn baron wants to buy the gas station, and Herman does his best to stop that from happening.

Zhadan mixes together comedic shenanigans with magical realist elements. Although “magical realism” may be too blunt of a descriptor, Luhansk and its environs have experienced events showing how porous this world is with the next. In one episode Herman has a soccer game with a few of his hometown friends. Only at the end, does he realize they may have been ghosts. While the game itself is presented in a realistic fashion, he encounters the graves of his friends on the same night. This only adds to the feeling that everything is slightly off in Luhansk.

To their credit, Isaac Stackhouse Wheeler and Reilly Costigan-Humes have done an excellent job with the translation. The prose radiates an off-kilter post-Soviet world, pop culture references and local slang, gangsters and capitalists all working to get by, but everyone unable to completely slough off the impact of the communist system.

Voroshilovgrad feels less like traditional magical realism than a season of David Lynch’s Twin Peaks or Oliver Stone’s U Turn. Recent world events expose how fraught this region is. The ever-present menace of Russian belligerence exists in the background of the novel. History and memory always on the brink of being erased or rewritten by the victors in a lopsided conflict. Recommended reading for those looking for a more lighthearted take on a region riven by suffering and war. Voroshilovgrad is yet another example of Ukraine’s cultural uniqueness and its post-Soviet literary scene.