Voices from the Warsaw Ghetto: Writing Our History 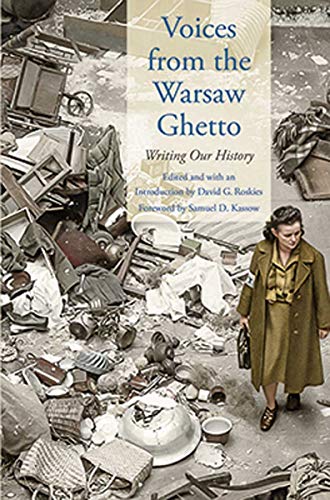 “This journal is my life, my companion and my confidant. Without it, I would be lost. In it, I pour out all my heart’s feelings, until I feel somewhat relieved. When I am angry and irritable and my blood boils, when I am full of reproach and bitterness, because I have so little strength and capacity to fight the vicious waves that threaten to engulf me; when my hands tremble with inner feeling—I take refuge in the journal and am immediately enwrapped in the inspiration of divine presence of creativity, though I doubt that my task of documentation is worthy of being called creativity. I find repose for my soul in it.”
—Chaim Kaplan, November 13, 1941.

“Sunday, the twenty-fifth of April, 1943. In the evening, the Jewish ghetto in Warsaw was set on fire, and tens of thousands of men, women and children perished in the flames; those who tried to escape the fire were shot on the streets, and those who miraculously escaped were hunted and tormented for weeks, for months, until they too were annihilated.”
—Journal of “Maor”

From April 19, 1943, to May 16, 1943, the Jews of the Warsaw Ghetto— imprisoned, starved and tortured for years, their vast numbers dissipated by deportations to Treblinka—began to fight back using Guerrilla warfare tactics, with smuggled, ineffective weapons.

Inside the Warsaw ghetto, thousands of Jews, religious and secular, old and young, men and women, artists, teachers, doctors, shoemakers, attorneys, policemen and laborers took up arms and organized to defend their families. Virtually none of them were experienced soldiers. Meanwhile, Himmler arranged for Panzer divisions and artillery to aid SS units and collaborators. It was a slaughter.

By May 16, 1943, Nazis maintained full control over the hazy smoke and dust that was the Warsaw ghetto. Hundreds of thousands of Jews had been starved, beaten, stabbed, shot, endured Typhus, and many were even buried alive. Countless thousands watched the murder of their children and parents before they were murdered. Families. It was brutal and abhorrent.

In 1940, historian Emmanuel Ringelblum began an incredible project to chronicle the terror and death associated with the Holocaust and the Warsaw ghetto. This secret archive was hidden from Nazis and Poles who assisted them. The contents of this archive record life within the Warsaw ghetto written by its residents in a time when they understood that they would soon be murdered.

Buried in metal containers underneath Warsaw Poland during World War II, the archive poured out the distressing content of these Jews’ last days. Many of them had already been deported to Treblinka and genocide. This underground collective was called, “Oyneg Shabes.”

The contents of Oyneg Shabes include personal testimonies, diaries, eyewitness accounts, poems, jokes, sermons, and drawings. Edited by leading authority David G. Roskies and with a Foreword by Samuel D. Kassow, this powerful book allows deceased victims of the Holocaust to speak to us today in their own voice. It is a lifeline into a past that very few of us comprehend.

This amazing archive includes the vast cultural and sociological dimensions of the Jewish experience in Poland when Nazi Germany conquered the nation and devastated the lives of every Jew.

The vast collection of written materials in this partially surviving archive includes posts from the young and the old, the pious and the secular, optimists and pessimists—all with the goal of countering German propaganda and preserving truth for future generations.

That this treasure of Jewish culture survived at all is astonishingly unlikely. These are the last words of countless Jews shortly before they were murdered by Nazi troops and their local collaborators. Here these victims pour out the contents of their spirit, including their most intimate wishes and desires, their values, ethics and morality, even while knowing that their turn to be murdered was near.

Holocaust researchers find value in every piece of information, including captured German war documents and the records of concentration and death camps. Even the records of trains that carried Jews to their deaths are of value.

Yet here, in Voices from the Warsaw Ghetto, we find the cumulative testimonies of thousands of Jews who had already been captured by the Nazis. Their lives are about to end. They have heard the rumors of what occurs at Treblinka.

Starvation, sickness, and death are a constant companion. Yet these tortured Jews, who have lost everything and everyone they love, take the time to chronicle their passage from life into death. Their crime was their choice of faith. Their sentence was death. That they bothered to give us this chronicle is miraculous.

The new docudrama, Who Will Write Our History, produced by Nancy Spielberg and directed by Roberta Grossman, is screening around the country today. It brings the amazing story of Oyneg Shabes to the screen, giving viewers a chance to access these writings.

This book is a clandestine archive by a Jewish underground collective who realized that they could be shot if discovered. It was a crime under Nazi authorities for a Jew to write anything about their lives, their religion, culture and their history. Everything was at risk when they produced these diaries.

Within this amazing archive of the Jewish culture in Poland, we find descriptions of the vibrancy of Jewish life, including the diverse personal reflections of Polish Jews, in a real-time perspective of those about to become victims of genocide.

Here, we find their unique story, written in the vast impending shadow of the Shoah. Here, bright, loving Jews pour out the contents of their hearts into tablets preserved by metal containers for posterity—for us. Here, we find the very depth of life, of love of culture. Here, we are confronted with a magnificent archive of life.