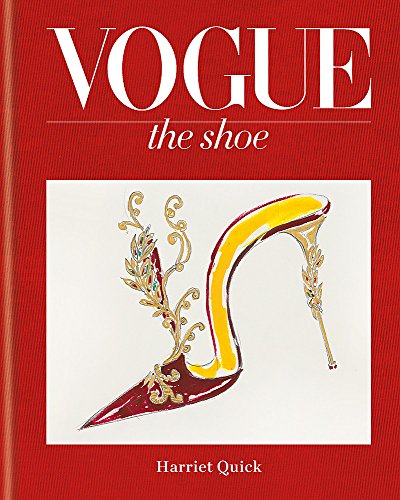 Don’t be taken in by the title. Most would expect the glossiest of images that might double as a scrapbook containing the most glamorous and fabulous shoes that ever hit the pages of Vogue. That assumption is only partially correct; the majority of compelling images are pre-2000 and while in some instances the shoe is the primary focus of the photo, in a vast majority of the images, the shoes are merely part of an editorial photo torn from the pages of British Vogue.

British is emphasized here to alert the prospective reader that many of the featured shoe brands are English while brand names such as David Evins, Beth Levine, and the Julianellis who were ubiquitous and hugely influential in the history of fashion shoes in the USA are omitted since apparently they were not popular or available across the pond.

What is most troublesome about this book is that the subject matter is shoes, which normally would dictate that the caption that accompanies each image has the shoe brand as its first descriptor. But in Vogue the Shoe, every caption starts with the photographer and not the brand of the shoe; that does not make any sense.

If you are a shoe fanatic or freak, this book might possess some appeal, but from an overall fashion history standpoint, Vogue the Shoe presents a very limited version of this accessory.