In Vogue: An Illustrated History of the World’s Most Famous Fashion Magazine 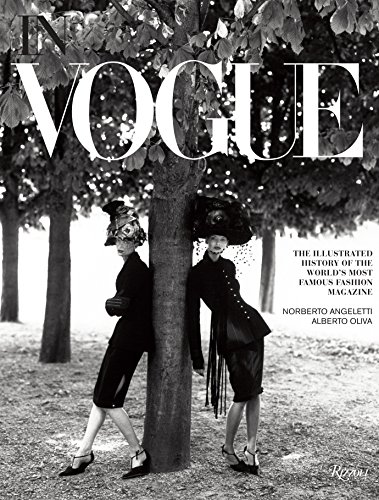 “. . . nothing short of a sublime gift to the fashion industry.”

It is safe to say that this paean to Vogue magazine should be subtitled Everything You Ever Wanted to Know or Recall of Vogue Magazine from the 20th Century. Hands down In Vogue: An Illustrated History is an exhaustive retelling of the history of the iconic magazine starting with its birth 120 years ago.

Without question, the beginning years—which featured illustrations on the covers—may have been groundbreaking for the turn of the century, but the magazine surely hit its stride once photography was introduced to its covers and fashion reportage.

This tome reminds the reader that Vogue has been a huge influence and laboratory for creative fashion as well as home to some of the greatest talents of the 20th century, whether designers, photographers, models, artists, or editors. The magazine was indeed the vehicle that made legends out of newcomers and icons from the unknown.

The book, epic in both weight and volume, dedicates almost half of its content to the work of its present editor, Anna Wintour, who was hired under the watchful eye of S. I. Newhouse and together they created a powerhouse that reaches far beyond just a magazine. For this reviewer, the focus really should have been concentrated more in the “iconic” years when the greatest of the greats were photographing and the unrivaled editors of those times were at the helm. Those unbelievable years laid the ground work for what Ms. Wintour has created as a mega brand with emphasis on celebrity and branding rather than just fashion.

In Vogue: An Illustrated History remains the authoritative and comprehensive source for all things related to this magazine. The cast of characters, the trends, the innovations, the stars, and the hall of fame that it created are all here between the covers.

In Vogue: An Illustrated History is nothing short of a sublime gift to the fashion industry and certainly one of the most instructive for the less fashion educated. It deserves a place of honor where its encyclopedic coverage can be used as often as any other beloved accessory.