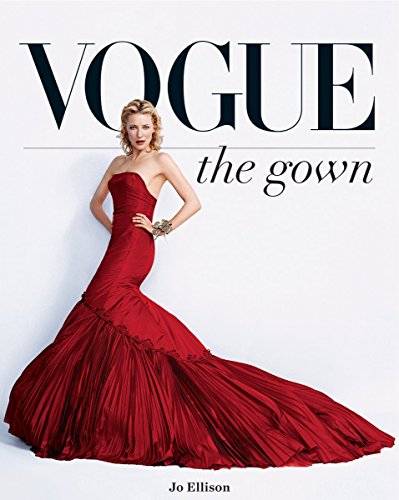 “To be clear—a gown is no mere dress.”
—Jo Ellison

Yet Merriam Webster defines gown as “a woman's dress,” which would surely be the vaguest and most general of definitions. Most of us think of a gown as a long dress worn in the evening or for a special occasion such as a wedding gown. Vogue: The Gown would have you believe that the book will focus solely on evening gowns that have graced the covers and pages of the magazine. The reality is that Vogue: The Gown is as much, if not more so, about the photographers as opposed to just the gowns.

The reader must examine various aspects of the book, the most obvious common thread is that the images supposedly celebrate the gown in its loosest sense of the word. Next is the context or additional commonality, and that is that all of these gowns/dresses have appeared on the pages of Vogue throughout its illustrious history. Lastly there are the images as stand-alone works of fashion photography.

This reviewer was far more fascinated by who took the photos rather than the subject of the photos due to the less than compelling visuals. To wit, the usual cast of characters (photographers) is present and accounted for, no matter the era, but there are a slew of little known or possibly barely known photographers who have contributed to the editorial pages of Vogue during its long run as THE fashion magazine.

It should be noted here that since this book was written by a Brit, who was the Fashion Director of British Vogue, as well as an introduction written by Alexandra Shulman, the ex-Editor in Chief of British Vogue, that the stilted content leans heavily toward both British photographers and designers with a preponderance of both that have been only featured solely in British Vogue. Knowing that, do not expect to relive or experience anew the glory days of Mrs. Vreeland, Brodovitch, Lieberman, or even Posnick (American Vogue) and many more that were crucial in the building of Vogue as both a magazine and a brand that represented the epitome of high fashion.

As a sort of general evaluation it can be stated that the book most certainly has its merits on an informational basis and can serve as a reference for all those consumed by fashion. What Vogue: The Gown is not  is a sumptuous visual feast of Vogue as an international entity. If one had to assign a grade to the book, it would be at B level performance when it really should have been at A+ given the topic and the archive available.