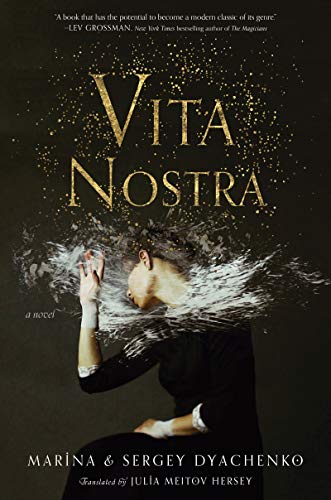 “One part coming of age tale, one part contemporary magic school, and a sizable part dark reality, Vita Nostra is a beautiful, aching, nearly debilitating fantasy that bruises, and thrills, the heart.”

“Time is a grammatical concept.”

While at the beach, 16-year-old Sasha is stalked by a mysterious man who will not leave her alone until she consents to a recurring “task”—each morning, swim naked in the ocean and touch a buoy. Dire consequences are given should Sasha fail to complete the task—not for her, but for her family.

Thus we enter the world of Vita Nostra, where children are selected, seemingly at random, and forced to attend a university that teaches them a nonsensical (at least at first) grammar-based magic system. Attendance is compulsory once you have been selected and refusal means the death of loved ones and eventually, your own death or insanity. The classes are grueling, the professors exacting, and no explanation is given. The secrets of the Institute of Special Technologies are accessibly only to those students who work hard and pass their exams.

Written entirely in third person limited, Vita Nostra follows Sasha on her journey and remains as much in the dark as she is about the undecipherable texts and pointless exercises. Here there is no friendly mentor, no delightful mischief, no high adventure. A misstep means illness or death to a loved one and the only way through is unending studying. Even when Sasha appears to have tried her hardest her professors still push, insisting upon more work, more study, more sacrifice:

“‘First and foremost, that means that your present is one of daily hard labor, like that of a slave, without idleness, fear, or doubt.’”

This is no delicate Western fantasy novel with thinly veiled Puritanical views and religious allegory (“‘Sasha, it is highly desirable for you to part with your virginity. It is becoming a serious impediment in your development.’”). There is no chosen one, no secret code, no holy relic and no portal. There is no key. Understanding of the story is as hard fought for the reader as it is for Sasha and the ending just as bittersweet.

This is true fantasy, real fantasy, filled with a world not how we wish it to be but how it really is. It is fantasy drenched in reality, not wish fulfillment: (“Every day people fall down, break their bones, die under the wheels of a car, drown, get hepatitis or tuberculosis . . . It’s in your best interest to simply do everything I ask of you.”) If ever there were a case for the category of “hard” fantasy, Vita Nostra would soundly fit within it.

The book does not skimp on the visceral. Like fairy tales of old, Sasha vomits gold but the gruesome mechanism is detailed. Her only respite from her mandatory running exercise is four days a month for her period. She must constantly walk the line between depression and success and the depths her work drives her to are well described. It is impossible not to both empathize and rail against the people that keep Sasha caged, yet we learn, as readers, to value the education along with Sasha as the book progresses.

Despite this depth and darkness, Vista Nostra does not lack humor (“‘Have you ever seen statistical theory making out with Newton’s first law of motion?’”). It instead couches said humor in the stark reality of the novel, employing it as a break from a tension so thick one occasionally has to remember to breathe.

Vita Nostra is a dark, enthralling fantasy quite unlike any other. Avoiding many contemporary plot devices, the book relies instead on an intoxicating sense of place and vivid character development. It uses only the barest edge of traditional fairy tale and magical fantasy tropes and takes them in unexpected directions, surprising the reader on every page. One part coming of age tale, one part contemporary magic school, and a sizable part dark reality, Vita Nostra is a beautiful, aching, nearly debilitating fantasy that bruises, and thrills, the heart.