Visual Thinking: The Hidden Gifts of People Who Think in Pictures, Patterns, and Abstractions 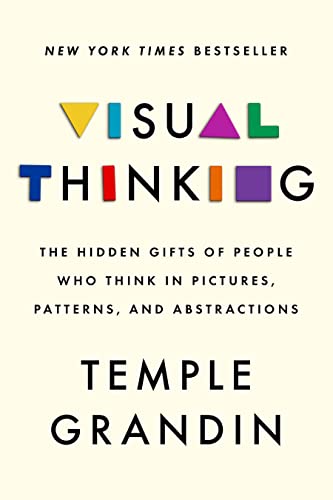 Temple Grandin doesn’t write captivating prose. A reader who needs to be entertained may miss out on what Grandin has to offer. Readers who persevere will learn a lot, such as that our original mental processing was based on images. As we began naming things, our verbal ability was applauded. Our visualization became less important. Over time, our verbal processing may have become our dominant thought processing system.

When speech is delayed, as is often the case in autism, visual processing remains primary. Einstein did not speak fluidly until age seven. He later wrote, “Thoughts do not come in any verbal formulation. I rarely think in words at all. . . . The psychological entities that serve as building blocks for my thoughts are certain signs and images, more or less clear, that I can reproduce or recombine at will.”

Elon Musk described his thinking in these terms. “It seems as though a part of the brain that is usually reserved for visual processing—the part that is used to process images coming in from the eyes—gets taken over by internal thought processes. For images and numbers, I can process their interrelationship and algorithmic relationships. Acceleration, momentum, kinetic energy—how these sorts of things will be affected by objects comes through very vividly.”

Unlike Einstein and Musk, most Americans, Grandin fears, are verbal mind dominant. If so, verbal processing can be lost. In his book The Master and His Emissary, British psychiatrist Ian McGilchrist explains that the visual mind can recognize both itself (the master) and the verbal self (the emissary), but the verbal mind cannot. The verbal mind can only recognize its own existence. Grandin is on solid ground when she says, “The greatest obstacle in understanding visual thinking is knowing it exists.”

Grandin fears verbal dominance puts the United States at a disadvantage compared with countries that reinforce visual thinking. She says, “we fail to encourage and develop the talents and skills of people who think in different ways. . . . The loss of skills in this country terrifies me.”

Verbal thinkers need to understand that words are not the whole ballgame. When catching a baseball, an outfielder does not think, “I need to go three feet left, back up two feet, raise my glove, and after 1.738 seconds, squeeze my hand, as that is the time the ball will reach the pocket of my glove.”

A visual thinker may be unable to maintain eye contact. Their eyes move off center when producing the images they must create in order to think. If the person speaking to them is a verbal thinker, they may question the honesty of the “shifty-eyed” person who is thinking visually.

She believes organizations can benefit by having an autistic person involved in analysis and decision-making. A person on the spectrum, she says, is likely to “see” problems others are unaware of. Grandin discredits herself by overselling this idea. She claims various disasters— California wildfires caused by power lines, Deepwater Horizon, Chernobyl, Three Mile Island, Fukushima Daiichi—could have been prevented if only a visually oriented person, a person with autism, had been consulted.

Readers who can overlook her outrageous claims may be able to find a reasonable level of value in Grandin’s advocacy of visual thinking. Though what we see with our physical eye can usually be relied on, what we “see” in our mind’s eye needs to be examined before being accepted as fact. This book could have benefitted from editorial scrutiny of Grandin’s thinking prior to publication.