Visiting Tom: A Man, a Highway, and the Road to Roughneck Grace 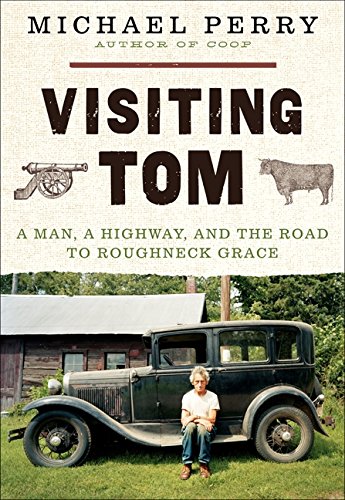 “You will find poetry in objects. . . . The layering of the storytelling is as rich as a frosted cake.”

Here are the top10 reasons to drop whatever you are doing and sit down to read Michael Perry’s Visiting Tom:

1.
You will meet a wise old guy named Tom Hartwig, an 82-year-old Wisconsin farmer who has more mechanical smarts than the Wright Brothers. This guy can find a dozen uses for a 50-year-old car engine.

Tom can teach all of us some of his tricks.

2.
Michael Perry might visit your town to talk about this bestseller—accompanied by his rock of a wife, Anneliese, his biological daughter Jane, and his “given daughter” Amy, Anneliese’s child with her first husband.

Mr. Perry tells us he refuses to use the word “stepdaughter” to describe Amy; she is a gift. She is also the co-star of the book and the vehicle by which we navigate author Perry’s heart.

3.
Lovers of literature should not shy away from this nonfiction work. Michael Perry is a craftsman of the highest order. His reflections on a firefly rival the nature writing of Annie Dillard and Diane Ackerman, serving as a rich metaphor for his love of family. And he moves between anecdotes with grace and humor.

As Tom and the author demonstrate, objects can bind people together. And the words describing these objects have intrinsic poetry.

In Tom’s workshop you’ll find, among other things, “an overlapping cascade of adjustable wrenches, ordered by size and draped in the vertical from a rough-cut stud. On the wall adjacent, a single row of open-end box wrenches hung neatly on nails. On the windowsill, a bristle of twenty-one screwdrivers jammed bladefirst into a Styrofoam packing block.”

It’s beautiful. Please read this passage aloud, slowly. As Nicholson Baker said regarding the tools to write good poetry, they consist of those short, hard Anglo-Saxon words that do substantive work, like a “rough-cut stud.”

5.
Mr. Perry takes on complex subjects: the struggle to be a good parent and spouse within the confines of one’s makeup; the preciousness of friendship captured in that intimate moment in a cozy kitchen.

Mr. Perry plumbs the depths because his self-awareness forms a large part of his aesthetic.

For example, he contemplates his daughter at bedtime in the next room: “But finally she does go to sleep, and I have that moment where I stand there in the night-light glow looking at the tiny figure and feeling at once overwhelming love and overwhelming fear that I won’t get it right. Your heart quakes, even as it swells so large your breath is tight. In the next room Amy is preparing to sleep as well, and I utter a little existential prayer that tonight there will be no anxiousness. When the last light in the house has been switched off and all is settling to silence, I lie in bed reviewing my own day, wondering—when it comes time to tell kitchen table stories of their own—how my children will cast the character of their father.”

6.
If you get tired of reading, you can just enjoy the pictures. Sprinkled throughout are photographs of Tom, his wife Arlene, his workshop, his kitchen, his cannon. Oh, yes, he has a cannon. Why? Read the book; find out.

7.
The layering of the storytelling is as rich as a frosted cake. The photos are the product of a Deardorff camera, a model unchanged from the 1920s.

Running through the narrative is reference to a photography session during which the visiting photographers, clearly enamored with all things ancient, including Tom, prompt Tom to discuss the subjects of the photographs. This photography session and Tom’s reflections/stories are interwoven with Perry’s narrative about other times in his life with and without Tom.

Ultimately, an overriding parallel is drawn between Tom and our author. Specifically, Tom recounts his fight years ago with a blunt-force Federal Government hell-bent on running a highway through Tom’s farm; and Michael Perry describes a present-day fight with the local commission over the change to a road leading to his home that Mr. Perry believes endangers his family and friends. Each man loves the land and its special demands; the government promotes “progress” with a deaf ear for the cost.

8.
Visiting Tom is practically apolitical. In one passage, Mr. Perry captures what many of us have felt: “Back on the interstate, I turn on the radio, a mistake I rectify by snapping it right back off when the purple-faced politics pour forth—an experience akin to opening the garden window, only to be greeted by the rear end of an explosively diarrheic donkey. But the toxins are catalytic, and in the subsequent soothing sound of nothing but wheels, and with many miles to go, I pluck up a thread I’ve been teasing in my head and give it a think.”

Mr. Perry’s thoughts are a refuge from this overblown blather and blabber coming at us from all directions.

A bit later, we even get a Utopian view when Perry breaks through political plaster. He imagines “If Rob [Michael Perry’s Democrat friend] shows up at Tom’s place with one of his eco-friendly rocket stove gasifier contraptions that was in need of tweaking, you wouldn’t see the two of them for a week, and all the sounds coming from the shop would be busy, happy sounds.”

9.
The overriding subject of this book is the respect for the values and traditions of the past, at work in the modern world. We don’t need to discard the former to stay current with the latter.

10.
When you go back to doing what you were doing when you picked up this book, you might just see your world with a broader, more humane perspective.