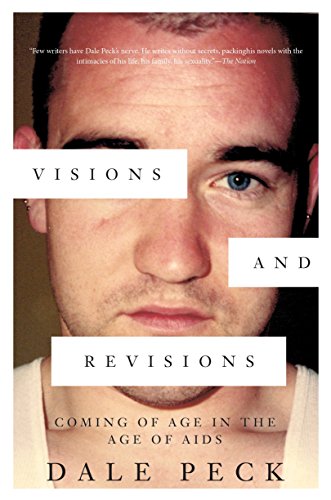 Writer Dale Peck was a journalism student at Columbia University when he joined ACT-UP at the height of the AIDS epidemic. He was not only going through the rights of passage coming out as a gay man he also became an activist-writer on the front lines of a defining era for gay rights. In his new book Visions and Revisions, Peck looks back in somber, acerbic, and often poetic style on that time and examining what it meant to him then and what it means now.

“We knew we were fighting a war: against HIV, against the AIDS epidemic, and against the political and social forces whose genocidal negligence led to the deaths . . .” Peck writes in the book’s opening chapter.

He weighs in on the power struggles of AIDS activist groups, of the eventual fractious dynamics and inspiring solidarity that emerged from those fights.  And he writes of the courage and strength of a generation of men and women who fought the good fight. Peck’s unblinking compassion and unapologetic analysis has not mellowed a generation later, but has become fueled with a sense of journalistic vigilance.

By 1996, the efficacy of anti-viral drugs changed the whole scenario of gay culture, sexual re-liberation, and political power on a national scale. The AIDS fight was not the primary political, social, moral, and activist focus of the GLBTQ civil-rights movement.

At the Village Voice, Peck was also writing an in-depth investigative series involving the murders of gay men picked up in leather and s/m bars in NY, London and LA. Peck names the men who were murdered, and writes about their lives beyond their being crime victims. Peck exposes how the various police departments didn‘t go out of their way to solve the crimes and routinely treated the cases as cold cases.

The book veers into dense literary criticism and commentary on “queer theory,” assessing controversial diatribe of such incendiary queer theory polemics as Leo Bersani's 1987 essay “Is the Rectum a Grave” as soberly as he deconstructs such artistic triumphs as Tony Kushner's groundbreaking play Angels in America.

The author’s blending of his relationships, casual or more involved, vis-à-vis his reporting has a potent verisimilitude, even if the stream of consciousness can get drifty, even gossipy with chatty verbiage And yet dense the academic mosaic gets, it is worth it for the salient points Peck makes.

Meanwhile, Peck is also candid about experimenting in the leather scene himself, not as a voyeur, but a participant, to deconstruct the gray areas that are negotiated between consensual partners, but sometimes not fully articulated on a psychological level.

The biggest surprise for those not familiar with Peck’s intimate style is in the book’s final section. Thirteen Ecstasies of the Soul is a jarring and brilliantly spare private musing full of sensorial imagery and surreal earthiness. Visions and Revisions coincides with the publication by Soho Press of a retrospective series of Peck’s literary novels.