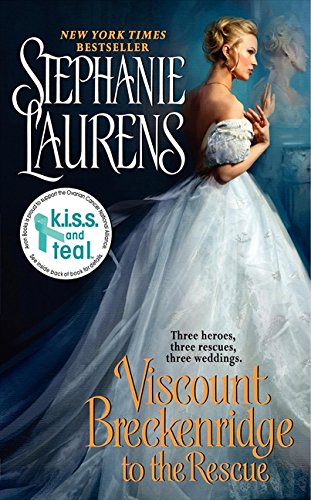 Viscount Breckenridge to the Rescue is the first in the Holding Out for a Hero trilogy featuring the three Cynster sisters who were first introduced in Devil’s Bridge.

In this opening book, Heather Cynster and her nemesis Viscount Breckenridge are forced into an unwilling partnership when Heather is kidnapped at the behest of a mysterious Scottish laird. Stephanie Laurens delivers assured writing, great sexual tension, engaging characters, and an intriguing plotline, making this novel a highly satisfying read.

Heather Cynster has given up on finding her hero in the strictly chaperoned ballrooms of the respectable ton, so she ventures into a racier venue. Not surprisingly, there she encounters Viscount Breckenridge, one of High Society’s foremost rakes. Unfortunately, he’s also a close friend of her family, so he feels it is his duty to rescue her from potential disaster. Because they continually rub each other the wrong way, he allows her to stalk off toward her carriage unescorted while he watches, fuming.

To his horror, she is seized and bundled into an unfamiliar traveling coach that promptly takes off at high speed. Breckenridge gives chase, managing to track down the kidnappers and come to Heather’s rescue—except she won’t let him rescue her. She has discovered that if she escapes, the kidnappers will simply go after another one of her sisters. She convinces Breckenridge to let her continue on the journey while he secretly accompanies the fugitives so she can learn who hired her abductors.

The flight north to Scotland is exciting and compelling, as Heather and Breckenridge meet every night to share the knowledge they’ve gathered and plan for the next day’s contingencies. Ms. Laurens skillfully builds the sexual tension between the two through their verbal battles and their physical awareness. Heather is a plucky, resourceful captive who well understands that her situation would be terrifying were it not for the protective presence of the formidable Viscount. Breckenridge chafes at the peril of her situation but agrees with the importance of discovering the man behind the crime. They make a smart and entertaining pair of lovers.

The hired kidnappers are believably competent, and their methods cleverly thought-through. Their fear of the man who hired them brings a note of urgency to Heather and Breckenridge’s dangerous charade. As the chase comes to a close, the mystery of the kidnapping laird becomes more prominent, although its solution is left for the following books in the trilogy.

Of course, Viscount Breckenridge feels honor bound to save Heather’s sure-to-be-ruined reputation by marrying her. Naturally, Heather does not wish to marry a man who is proposing only to save her good name. This push-and-pull creates many a steamy love scene. If the emotional barriers between them seem to last somewhat longer than necessary, it is a small quibble in an otherwise intense and interesting relationship.

Viscount Breckenridge to the Rescue sweeps the reader along at the speed of the kidnappers’ galloping team of horses, offering suspense, passion, and intrigue in the most pleasurable of combinations.

Note: Viscount Breckenridge to the Rescue is part of Avon’s K.I.S.S. and Teal campaign, supporting the fight against ovarian cancer. Avon will donate 25 cents from the sale of each book and e-book to the Ovarian Cancer National Alliance.