The Violin: A Social History of the World's Most Versatile Instrument 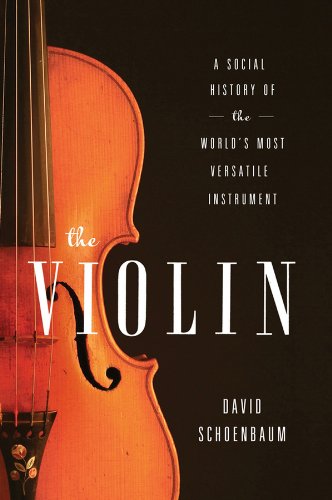 Society, as a whole, has become accustomed to convenience. It seems like there is a Starbucks on every corner and at huge big box stores like Wal-Mart or Costco, folks can buy their toilet paper at the same place they purchase flat screen TVs. We love our one-stop shopping, which makes David Schoenbaum’s latest release perfect for any violin lover (or even those who are simply vi(olin)-curious.

The Violin: A Social History of the World’s Most Versatile Instrument covers almost anything anyone could want to know about the violin in one convenient location.

In an interesting turn of events, though, the violin’s origins are still unknown. The violin may be popular, but unlike Bartolomeo Cristofori and the piano, or Adolphe Sax and the saxophone, no one has ever been able to uncover who, exactly, created the stringed instrument or where it originated.

Until some errant scholar uncovers the lost answer, we must content ourselves with the vast amount of information that Mr. Schoenbaum has assembled. As a lifelong amateur, the author obviously loves the instrument he so painstakingly researched. Instead of looking at the violin as simply wood and strings, Mr. Schoenbaum chose to approach the instrument as a tool for social discovery. From the courts of kings and queens to more recent immigrant families, the violin has always bestowed a level of prominence and social standing to its owners.

As a lifelong pianist, this author would feel like a traitor if she did not argue (at least a little bit) that the violin is one of the world’s most versatile instruments. The biggest advantage the violin has over the piano is portability. Vanessa Carlton notwithstanding, gypsies were not known for traveling around with pianos in their wagons. But in terms of musical importance and prominence, the violin and the piano are certainly equals.

Mr. Schoenbaum’s book is definitely detailed and it is better enjoyed in pieces here and there than taken as one big chunk. As one would expect with a 736 page, it would be difficult to devour all in one setting.

What started as a simple book with four chapters expanded, over time, into the massive literary monster released here. Mr. Schoenbaum commented that at times it felt like he “might be working on a giant obituary.” But the violin will never die. It might grow and change, but its music is something that will remain with us, thanks to the musicians and authors that love it.

Now let us all get out our Suzuki books and turn to page seven for “Twinkle Twinkle Little Star.” . . .