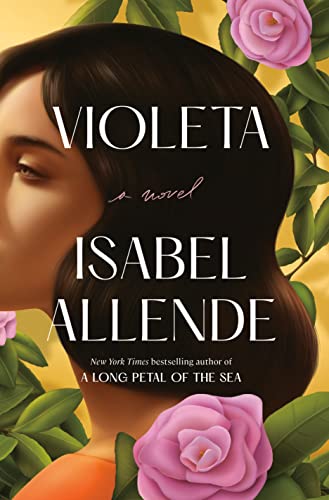 Isabel Allende is a wonderful storyteller. Her distinct voice and her vivid imagination have delighted readers for many years now. Her latest book, a 300-plus page letter in installments to someone she loves dearly is, like her other novels, peopled with amazing characters, exciting events, romance, trouble, treasure, and in this case, a great deal of history, since Violeta lives to be 100 years old.

Violeta is not exactly an epistolary novel in the truest sense since readers never see a letter from the person to whom she is writing, whose name is Camilo. Indeed, his place in her life isn’t revealed until late in the novel, although there comes a time when readers are likely to guess, nor do we get to know Camilo until late in the story.

Violeta is a typical Allende female character. She is feisty, emotionally voluptuous, risk-taking, sexy, smart, and outspoken. She is also, like Allende, funny and successful, as we learn in her riches to rags to riches life story. It seems clear that the author draws from her own life as she shares her protagonist’s life and times; Allende herself has a romantic spirit, has lost a daughter, has started a foundation, has traveled the world, and has lived through dramatic political times.

Numerous other characters populate Violeta’s story, from her aunts to her maids to her childhood Irish tutor, to her children, the many men in her life, including a gangster, a detective, and a Norwegian diplomat. It’s a romp told against the background of a century of world history.

Allende’s latest novel, told in a long, linear narrative, may leave some devoted readers wishing for more truly dramatic scenes, more vivid descriptions of people and place, and more dialogue among the characters, so that the story of remarkable people, places and events jumps off the page as they do in previous novels by this gifted writer. Why, for example, don’t we hear people speaking with each other more in their unique voices rather than Violeta recounting briefly what they’ve said?  Why doesn’t a written conversation ensue between Violeta and Camilo in which they “talk” to each other and she answers his questions about the events occurring in her complicated life, or he can enlighten her about his choices and circumstances? Why don’t we feel we’ve really seen the homes or countries Violeta inhabits over the years with richer descriptions of those places? Where are a few scenes from the political revolution that takes place in Violeta’s country so that we see and feel what was happening?

Much of the best writing in this story appears in the closing chapters when Violeta has grown old and older. Pearls of description emerge as she describes her country: “[It] had every type of landscape: a lunar desert, long coastline, tall mountains, pristine lakes, valleys of orchards and vineyards, fjords and glaciers. . . . We were friendly and welcoming people.” Personal reflections are moving: “My life changed during those years,” Violeta says, quoting poet Antonio Machado. ‘There is no road, the road is made by walking,’ but in my case it felt more like I was stumbling down narrow, winding paths that were often swallowed by vegetation. Still, I entered my seventh decade with an easy spirit, free of material ties, and with a new love.”

On her deathbed, Violeta’s faithful maid, Etelvina, asks her if she is afraid of dying. “No, I feel content, and curious. What will be on the other side?” she replies. Pure Violeta.

“Come back to haunt us, Senora, and tell us what it’s like to die.” Now that’s pure Allende.