History of Violence: A Novel 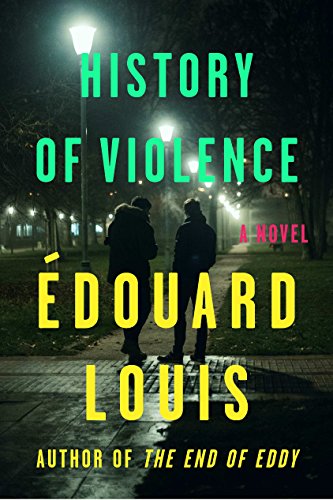 History of Violence is not, as the title suggests, a big, fat tome about human aggression, brute force, and cruelty, though it describes a world in which violence shapes the life of the narrator and main character who tells his own story over and over and over again.

Or rather, the narrator tells one story over and over and over again. It’s the story of how he was raped, robbed, and nearly murdered in his own apartment in Paris by a beautiful young Algerian man named Reda.

By telling the story over and over again, to his friends, his sister, to the police, and to the doctors in a hospital where he seeks medical help, he hopes to survive and not be traumatized.

And yet, ironically, by telling the story of his rape, robbery, and near murder, the narrator returns to the scene of the crime and inflicts a kind of emotional pain on himself.

Readers will surely share that pain and empathize with him.

Édouard Louis is the pen name of Eddy Bellegeule, who was born in 1992 in Hallencourt, a working class village about 170 kilometers directly North of Paris. He is the author of two novels, The End of Eddy (2014), History of Violence (2016) and two works of nonfiction, plus a 2015 manifesto in which he and his co-author, Geoffroy de Lagasnerie, urge French citizens to “occupy space” and “bring the left to life.”

Louis’ two novels are bestsellers not only in France, but also all around the world. The End of Eddy has been translated into 30 languages. A third novel, not yet published anywhere, but scheduled for release in 2018 bears the title Qui a tué mon père. It’s eagerly awaited on both sides of the Atlantic.

Lorin Stein’s translation of History of Violence is faithful to the original: spare and yet evocative, poetic and at times in the manner of a tabloid. The editor of The Paris Review, she has shown that translation is an art and not a mechanical task.

It’s not difficult to understand why Louis’ novels are so popular globally, or why the manifesto he wrote with de Lagasnerie was published on the front page of Le Monde and in the pages of The Los Angeles Review of Books.

History of Violence has echoes of Camus’s The Stranger (1942), as well as William Faulkner’s 1931 novel Sanctuary, which tells the harrowing tail of the abduction and rape of Temple Drake, a student at Ole Miss who moves to Paris with her father presumably to begin life anew after her traumatic experiences.

In History of Violence, the narrator identifies with Temple Drake. In a brief “Interlude” which breaks up the narrative, he writes, “I’m stunned by my encounter with Temple Drake, by the parallels between us, by thoughts of hers that are exactly identical to my own.”

Indeed, he invites readers to think as well as to feel and not just at the end when he becomes precisely what he has not wanted to become and has done everything in his power to avoid: a racist and a police informer.

At the beginning of the novel, just as he starts to peel away the layers of his complex identity he explains, “people who are hated become hateful in the end. I was no different.”

The narrator also says that when he first left his village for the city he wanted to “go to a place where he had no friends, family, no past.”

A participant in and an observer of his own seduction and violation, he is caught up in a web that’s partially of his own making. In that regard, he’s a literary descendant of Julian Sorel, the anti-hero in Stendhal’s 1830 classic The Red and The Black.

Still, Louis is his own man: a survivor, a writer, and a healer of his own scared body and wounded soul.

William Faulkner, the unreconstructed Southern who lived in Paris briefly and who wrote about it in Sanctuary, would be delighted to know that Temple Drake has a soul mate in Édouard Louis and that the French novel again has a new voice with a style all its own.