The Vineyard at Painted Moon: A Novel 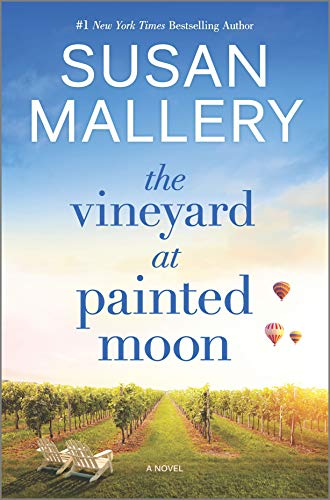 As a child, Mackenzie Dienes is raised by her grandfather after her parents die. Then as she is about to start college, he passes away, and she loses the only family she had. She and her roommate Stephanie bond at once, and Mackenzie is invited to their home for Christmas. Stephanie's close-knit family who owns Bel Après, a winery in Washington state, welcome her making her feel one of them—something she's always wanted. Smitten by Stephanie's handsome brother, Rhys, she later marries him and feels she is part of the family.

Sixteen years into her marriage, Mackenzie loves her home, her adopted family, and her job as a winemaker—a profession at which she excels . . . still, something is amiss. What happened to their closeness and passion? All she and Rhys ever talk about is business. Even having a beautiful home and the ones she cares for most close by she cannot claim she is happy. Rhys and she no longer share a room or bed or have been intimate for years, but it seemed an agreeable arrangement to them both—that is until Rhys shocks her by asking for a divorce. His request comes with a coupling neither expected nor enjoyed. Was this to be a last goodbye?

Here she contemplates the end of their marriage:

"She sat with the truth, wondering how to get through this moment and the next and all the moments that would follow. Who was she if not married to Rhys? Being with him informed her life, the rhythm of her days. Without that, what did she have? He had been a part of her for her entire adult life. If that was gone, how would the hole he left ever fill in?"

Mackenzie has worked tirelessly as a "partner" with Barbara, the matriarch, and has brought much growth and additional revenue with her acumen and skills. Believing one day to be part owner of the winery, she never considered leaving, but how can she remain now if she is not married to Rhys? Especially when Barbara claims only "blood" can own the winery.

Rhys is congenial stating Mackenzie does not have to leave their home or her job until she gets her life in order. What hurts her the most—she realizes she will be losing everyone she loves; all those she considers family. But they are Rhys' kin, not hers, and all her loving labor has been for naught.

Mackenzie always considered Barbara as a second mother and now her attitude causes her much stress. Though Barbara can be trying at times and a hard taskmaster, Mackenzie thought her love for Barbara was reciprocated. Now, with the news of her upcoming divorce, Barbara becomes bitter toward Mackenzie. She becomes ruthless while trying to ruin her name. Believing Mackenzie is a traitor, she berates her for Rhys wanting out of the marriage, showing her evil and uncaring side, not only with Mackenzie, but to her own children, too. Before long, the true Barbara is exposed displaying her greed, narcissism, and contempt for others especially her own flesh and blood.

Meanwhile, Stephanie, brokenhearted about Mackenzie and Rhys splitting up, informs her they will always be best friends, no matter what. Stephanie handles the retail part of the company, and she also reels from Barbara's condemnation of her and her proposal to build the business more by adding a café.

"Her mother waved her hand. 'You're forever coming up with ridiculous plans for the retail space. The café is a classic example. Why would we bother? Just do your job and don't try to be special.'

"Stephanie put down her pad of paper and stared at her mother. 'Is that really how you see me?' she asked quietly. 'When I took over the retail space, sales were stagnant. Now they're up over twenty percent every year.'

"'Of course they are. The wines are selling better and better. People come to taste them and buy whatever is in there.' Her mother raised her eyebrows. 'You didn't think you were making it happen, did you?' She smiles, 'Oh, Stephanie. Really? It's not you. It has nothing to do with you.'

"The sentiment should have been a surprise or an emotional slap and yet it was both those things."

Before Rhys's news of wanting out of his marriage, Barbara believed her life could not be any better. At their annual Summer Solstice gathering, she becomes engaged to Giorgio, a man who showers her with a huge diamond and the hope for a loving future. While Barbara walks on air, everything quickly falls apart for both Mackenzie and her with her son's impending divorce.

As Mackenzie's life crumbles, she must figure out what her life will bring. Always wanting to own a part of something, when the chance to buy her own vineyard arises, she grabs it, partnering with Bruno Provencia, a wealthy entrepreneur who is looking to start a new endeavor. With his financing and business expertise, Mackenzie hopes to find the true happiness and fulfillment she deserves.

Barbara, the antagonist in this novel, is filled with anger and hostility, and Rhys, seemingly content with his life appears cold as time progresses. It seems inconceivable a couple in their thirties would remain married for so many years sharing no intimacy in their lives. Though he is accommodating regarding his wife's future, he callously drops the divorce bomb on her with no warning, yet he states he's never been unfaithful. Though Mackenzie too, admits their marriage is stagnant, why is he in such a hurry to end it? One would think they would consider counseling or something. It appears so far-fetched to have this dumped on her out of the blue.

The author pens great characterization that invokes incredulity and anger in the reader, cheering the underdog while scowling at the callousness shown by a few. Throughout all this, Mackenzie learns those she thought loved her were not at all as she believed they were. When it comes to money and power, do we actually know those closest to us? As the Phoenix rose from the ashes, Mackenzie finds the strength and independence to refine her life.