The Victims Return: Survivors of the Gulag After Stalin 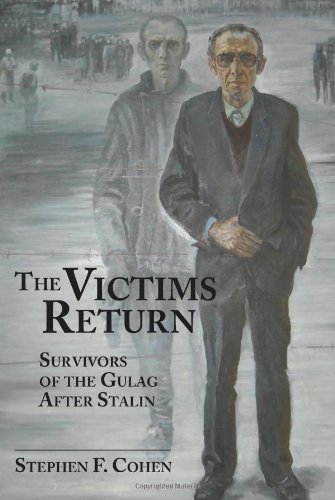 In 1929, Stalin began his ruthless purge, imprisoning and murdering millions of innocent Russians. It began in the countryside, as Stalin attempted to collectivize 125 million peasants. From 1936–1939, Stalin’s effort to “cleanse” the nation descended upon Russia’s cities. Almost two million people were arrested. Virtually half of them were shot. The rest entered Stalin’s immense gulags (faraway camps), stretching from the Ukraine to Siberia and Kazakhstan.

During Stalin’s reign, from 1926 to 1953, up to 20 million Russians died as a result of deportation, imprisonment, harsh conditions, and various results of “collectivization.” An estimated 12 to 14 million innocent Russians were imprisoned in gulags from which they would never return. In most cases, they were never heard from again. Many of these victims were summarily convicted by assembly-line tribunals, known as “troikas.” Most were tortured to death or did not survive prison interrogation. As the torture continued, so did the proliferation of mass killing areas and gravesites around the country. The vast majority of these people, just like Alexander Solzhenitsyn, were innocent of any crime.

Stephen F. Cohen carries us deep into the story of Stalin’s gulags, as seen through the eyes of the family members and a handful of survivors. Cohen, by virtue of his significant scholarly experience and his many years living in the former Soviet Union, offers a fresh view of the abuses of government in Stalinist Russia and beyond, through perestroika and to the collapse of the USSR. He writes primarily of famous “zeks” or prisoners who were tortured to death, or perished from massive forced labor, starvation, sickness, and brutal climate conditions.

More importantly, Cohen focuses on how the genocide emotionally scarred the victims’ families. A handful of zeks were able to smuggle letters to family members and friends. Through these precious words, Cohen reveals details of the greatest mass murder in history. Yet there are many more victims who left no last words. The spouses, parents, grandparents, and children of those unjustly imprisoned themselves became victims. Hardly a family in Russia escaped this deadly national tragedy.

Cohen describes how Russia became a glorious world power under Stalin, who cast his repressions as a necessary way to control “enemies of the people.” We are eventually swept through the end of Stalin’s regime, into the Khrushchev era and beyond—times of great social turmoil and political transition. Cohen had personally identified with many leading anti-Stalinists, becoming a patriot of the new perestroika in his own right. Here, he becomes both writer and the topic of his writing. This presents as a painful process for Cohen, as he must decide whether to write about himself or the victims he came to love.

In this dichotomy, Cohen typically moves away from his own actions. Immersing himself with the surviving family members of prominent gulag victims, Cohen describes how the events and culture of the gulags became known via representations in stories, music, theatrical interpretations, literature, paintings, and even sculpture. The reader is carried along through a detailed analysis of mass murder, including all the unknown heroes, powerful political leaders, inspired family members, and terrorizing villains.

On the road to Russian recovery, we come to appreciate the internal and external pressures leading to the anti-Stalinist policies of Khrushchev, Gorbachev, and Yeltsin. Like Holocaust survivors, Stalinist victims wrote memoirs. Cohen describes how these memoirs were at first anti-Russian, but eventually became a roadmap for the Russian catharsis after the gulag had ended. And, while this was an irritating process for the Russian people, through Cohen’s eyes we see the agony of millions of family members whose loved ones were unfairly imprisoned, tortured, and murdered. Although many children of victims went on to have successful careers, most remain psychologically traumatized by the suffering they and their loved ones endured.

While only a small portion of this “historical truth-telling” could be published in the Soviet Union, Cohen allows that the political pressure shaped by this writing also created an avenue for inspired national leadership and the promise of eventual freedom of the press. Immersed within the anti-Stalinist institutions of post-Khrushchev Russia, Cohen reveals the eventual rebirth of individual freedom and the ultimate state-supported reporting about the mass graves, terror, and resulting martyrs.

When Alexander Solzhenitsyn died in 2008, President Putin’s government organized the equivalent of a state funeral, enacted measures to memorialize his life, and then made The Gulag Archipelago required reading in Russian schools. In this, Russia had come full circle by surviving, institutionalizing, and memorializing the terror of Stalinization.

Yet there remains significant pessimism among the Russian people. Many of them view the new leaders in the same way their parents and grandparents viewed Stalin: out with the old tyrant, in with the new one. We sense that the vast political struggle over this greatest of all Russian tragedies is coming to an end. But the nightmares, regrets, and tears will not be over until the last survivor and all of the victims’ children are gone.

Cohen is an excellent writer. He weaves the tale of Stalin’s great grip of terror carefully and accurately. His references are thorough. At times, however, it is difficult to comprehend how Cohen has personally influenced this story. He writes with adept detail of the relationships he has made with eminent Stalinist victims and their families. We see and feel the gulags through their eyes. Yet we never have a full sense of the persuasion Cohen has over his subjects and their efforts to publicize the terror of their imprisoned family members. We are also left wondering about the depth of current sentiment for or against the Russian government. How has the current regime influenced opinion about the old one?

Cohen focuses on prominent Russians in the anti-Stalinist movement. Perhaps in the effort to encompass so many victims and their family members, we become lost in the crowded landscape. He might have focused on fewer victims and delved deeper into the circumstances of their imprisonment. This book would also be enhanced with pictures, tables, and graphs. (This reviewer read only the galleys.)

Stephen Cohen brings to life the horror, shock, and despair of Stalin’s gulags. With intense brutality and abrupt imprisonment, the gulag victims and their families cry out for justice. While many nonfiction books of this genre remain locked on Stalin, his mind, and temperament, Cohen shows us Stalin’s national horror from the viewpoint of victims’ family members. This is a well-researched, well-crafted examination of Stalinist Russia, as told through the eyes of a prominent writer and historian.