The Verdun Affair: A Novel 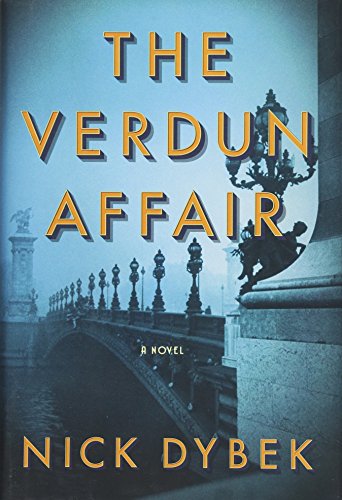 “An outstanding novel that is riveting and unforgettable, gut-wrenching and evocative.”

The Verdun Affair is one of those books that appear too seldom: eloquent, with characters who seem more real than fictional, a setting that haunts long after the book is finished, but best of all, a story that cuts the reader to the heart.

Nearly three-quarters of a million men died at Verdun during the longest-lasting battle on the Western Front in WWI, although the battle was euphemistically referred to as the Verdun affair, as if that would mitigate the horror of it. A majority were listed as Missing—Presumed Dead, because their bodies were either not found or found so profoundly destroyed that they could not be identified.

The battlefield at Verdun is still being searched in 1921, three years after the Armistice, that interval during which the Allies embraced a sense of complacency while Germany re-armed in anticipation of the continuation of the war begun in 1914.

Tom Combs, a young American who is orphaned by the war after coming to France to live with his father, now works for the Catholic Church in Verdun. His primary task is to search the enormous battlefield for the bones of causalities never recovered and now unidentifiable.

“What else was left? Bones in boots, a rusted bucket, a shattered root. Gravel and wheels of motorcars; spokes and strips of rag. A solitary tree, black against the sky, like a finger pressed to the lips calling for silence.”

To the soldiers, such as young man named Martin, living in the trenches, waiting to be sent “over the top” into machine fire or poison gas or to fall into the hastily dug German trenches. “The sky lit orange, glowing like a hearth. Martin had not thought of the sky so much before coming to the front. But that was his world for three years: mud, rats, the dead, the sky.”

Even before the Armistice in November of 1918 they came: the mothers wives, sisters, fathers, all looking for their loved one who is ‘missing, presumed dead.’ “They would weep and talk—for hours sometimes—about the man they lost.”

It is Tom’s job to “record the family names in a separate set of files to ensure their inclusion on the ossuary’s wall of memorial.” Another job is to write the names and descriptions of the missing men in a ledger, and to write to the Red Cross and the Ministry of War to ensure that nothing has been overlooked.

“For some the sight of the churned earth, the rusted wire, the crumbling forts and twisted bunkers was enough. For some the question that had coiled around them for months or years—how could this have happened to my son, my husband, my brother—began to make horrific sense.”

One such woman comes to Verdun seeking news of her husband. Since the woman is an American, Father Perrin asks Tom to meet the woman, show her the half-built ossuary, take down what information she might have, and assure her that they will help if they can.

Ordinarily that would be the end of it: a meeting where Tom will listen, knowing that her husband is undoubtedly already found in the form of the mismatched bones picked up from the dried mud of the battlefield of Verdun.

Sarah Hagen is different, and Tom is immediately aware of it. Like him, she came to France to visit and was caught in Paris when the war started. After briefly returning to America, she but is now back in France seeking information about her husband.

In the misguided belief that the anger he sees in her eyes is directed at him, Tom tells Sarah that he briefly met her husband Lee. It is a lie he regrets, but one he is unable to confess to Sarah. As harmless as such a lie may seem, it is pivotal to their relationship.

Tom and Sarah have an affair while she is in Verdun. Father Perrin learns of it and is disappointed in Tom’s behavior. “But you should be careful. Suffering speaks a language all its own. And that language is seldom literal. Do you understand me? Do you feel ashamed?”

Tom understands that Father Perrin is saying he has taken advantage of a grieving widow even if she seems not to be grieving. The only thing Tom would change is how he met her; otherwise, he wouldn’t change a thing.

Father Perrin sends Tom to Paris to a job in a weekly newspaper. Even here Tom can’t escape the war. The newspaper offers ads at a cheap rate to those looking for their missing men. “Looking for any news about Pierre Barcolle. Disappeared in the Champagne sector, in February 1917. Last seen on patrol on the night of the 17th during a gas attack.”

After months a letter arrives from Sarah. “And, frankly, I fear it was only hopelessness that made my feelings for you possible.”

It seems Father Perrin is right; Sarah is suffering, and Tom has added humiliation to that suffering.

Then Tom’s editor tells him of an amnesiac in a hospital in Bologna, Italy, close to where Sarah is staying. The amnesiac’s doctor, a Dr. Bianchi, believes the man is an American. Sarah must have read of him and traveled to Bologna, hoping the man the medical staff have dubbed Douglas Fairbanks is her husband.

While in Bologna Tom meets an Austrian journalist, Paul Weyerhauser, who is certain that Douglas Fairbanks is an American ambulance driver responsible for murdering the Austrian soldiers Paul commanded.

Chapters set in Los Angles in 1950, in which Paul and Tom meet again, are interspersed with chapters of the aftermath of the war, the amnesiac named Douglas Fairbanks, and a harmless lie.

An outstanding novel that is riveting and unforgettable, gut-wrenching and evocative.