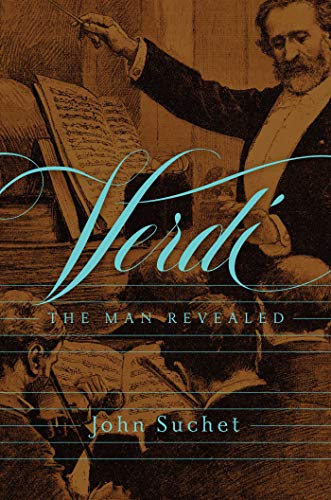 Verdi’s life was the stuff operas are made of: sex scandals, political turmoil, creative pitfalls, testy divas, and meddling producers, but nothing stopped him from becoming the most famous opera composer in the world and an Italian national hero to boot. That he was able even to rebuild his life after the deaths of his young wife and two infant children is testament to his steely resolve. Music historian John Suchet’s chronicles the composer’s life and storied times in Verdi: The Man Revealed.

In 1813 in Le Roncole, Northern Italy, Giuseppe Verdi was born on French soil that Napoleon had seized just months before, but was about to come under Austrian rule. Verdi grew up in occupied Italy and for all of his life remained a full-throated Italian nationalist. His biggest early success, in fact, was his religious epic Nabucco, with his famous “Chorus of Hebrew Slaves” that was embraced by Italians as an anthem of liberation from foreign domination.

Verdi would always claim that he grew up impoverished, but in fact his family ran a successful inn in Northern Italy, with an active café where Verdi heard troubadour musicians and singers throughout his childhood. His musical talent was evident from the start and he learned to play the church organ so well in the village of Busseto that he often substituted for the official church organist.

At 19, Verdi pursued his music career in Milan, but, even with influential benefactors, his application to study composition to the prestigious Milan Conservatory was rejected. Verdi never forgot that slight and kept that rejection letter on his desk for the rest of his life. The conservatory advised, dismissively, that he take lessons from master composer Lincenzo Valigna, a master composition teacher, who in fact had a much more positive reaction to Verdi’s natural talents as a composer. Sixty years later when the conservatory proposed that they would change their name to the Verdi Conservatory in his honor, the composer furiously refused.

Even under the guidance of Valigna, Verdi was unsure if he would be able to break into the tumultuous commercial opera world. But La Scala impresario Bartolomeo Merelli was having a troublesome season and needed something new, so he engaged Verdi. His first opera “Oberto” was a solid hit, and Merelli commissioned three more.

His second opera “Un giorno di regno,” a comedy, was literally booed off the stage at La Scala in its single performance. He was ready to walk away from the whole profession and decided to return to Le Roncole, raise a family, and become a farmer. But instead of dismissing Verdi, Merelli convinced him to re-score a dead in a drawer libretto by Temistocle Solera, which became Verdi’s breakthrough opera, “Nabucco.” The story of Israelites being held captive in Babylon resonated passionately with Italians longing to be free of Austria’s domination.

Verdi’s personal life was blossoming as well; he and Margherita Barezzi married and had two children, but his happiness didn’t last. Their daughter Virginia was born ten months after they married and their son Icilio was born the following year. A month after his son was born, Virginia died and 15 months later his son died of what was suspected to be bronchial pneumonia. Shortly after Margherita suddenly fell ill and died of what is suspected to be encephalitis or rheumatic fever.

When Verdi was strong enough to pick up his life, he somehow found solace in work. Verdi had previously met European opera star Giusseppina Strepponi and they started an affair. He also resumed his relationship with Strepponi, who was now semi-retired, and publicly vilified for having children, but giving them up for adoption. Verdi and Strepponi would eventually marry (though they kept it secret) and live on Verdi’s large estate Villa Sant’Agata.

Verdi had an often adversarial relationship with both his parents, and even though he supported them financially, there were long stretches of estrangement. He spurned them over their disapproval of his secret marriage to Giusseppina when she came to live with him at Sant ‘Agata estate, and cut off almost all contact but reunited with them as they aged and became ill.

Verdi was in ill health himself from overwork at age 31 yet was under pressure, and bound by contracts, to continue composing and rehearsing new works. Disagreements with Merelli led to a total break, and Verdi did not take commissions from La Scala for the next 25 years. It did not hurt his career because by then he was in demand and getting commissions all over Europe.

By middle age, Verdi was the most celebrated composer of his day, a national hero, and a land baron, and he even entered the realm of politics. He also became a tireless operatic taskmaster, completely obsessive about the strict conditions in which he would compose and collaborate in staging his operas.

He drove his singers to rehearse scenes 100 times for instance before moving on to the next and had the last word on the librettos. Even as the critics of the time were deriding Verdi for repeating motifs in his operas, his success with the public only grew and now his operas are as popular as ever the world over.

Suchet writes about the vaulted world of opera with insight and wit and laces in musicological analysis without making it heavy going. Meantime, we get the backstage drama and comedy that swirled around the creation of Verdi’s greatest operas including “Nabucco,” “Otello,” “Aida,” “Rigoletto,” “Macbeth,” “Luisa Miller,” “Un Ballo in maschera,” “Il Trovatore,” “La Traviata,” “Jerusalem,” “Don Carlo,” “Simon Boccanegra,” “Ernani,” “Falstaff,” and, of course, “La forza del destino.” This handsomely designed edition by Pegasus books is beautifully illustrated with theatrical illustrations and dramatic period photography.