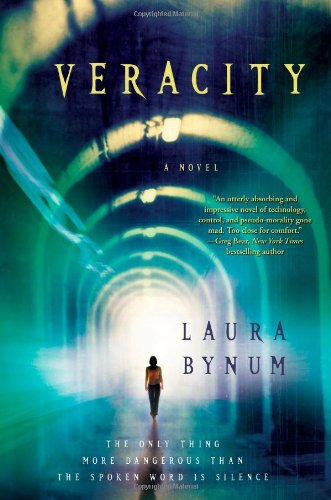 If one doesn’t make the comparison of the author’s debut effort to George Orwell’s novel, 1984, then there’s been a huge disconnect somewhere.  Veracity is a futuristic tale of a government gone rogue.  It’s a suspenseful tome, which, given what’s occurring in our nation’s capital, seems almost like a foreshadowing of events that might not be so fictional after all.Laura Bynum crafts a frightful look at how absolute power and secrecy can spawn evil and destruction.  In the year 2012, a cataclysmic virus, described as an act of terrorism, has decimated the United States, killing half of the population.  A new government emerges, the antithesis of what formerly existed.  This new ruling body, called The Confederation of the Willing, or simply, The Confederation, slowly eradicates most of the freedoms and choices the country used to enjoy. The new rulers have a unique way of enforcing the new mandates:  government-sanctioned sex and drugs; a police force that punishes on the spot, via rape, torture, and murder; and an implanted device in each citizen, which monitors every spoken word.  The Blue Coats, aka the police, take full advantage of their power, even to the extent of fighting among themselves to levy the punitive actions they take.The book’s protagonist is Harper Adams, who has had a special gift since age six that allows her to “read” people.  She is selected to become the Alpha Sentient—a position to be exploited by the ruling powers to ferret out resistance movements among the population.  That same gift is why the underground is trying to recruit her.Adams had a daughter taken from her after her divorce.  The girl’s name was Veracity, a word Red-Listed along with thousands of others.  We learn further along in the book that Adams’ motivation is her desire to someday be reunited with her child, rather than maintaining her vaunted position in the new government.Most of the action takes place in the year 2045, but there are several chapters, glimpses into the past, that seemed somewhat distracting.  The story may have flowed better had the author incorporated some of the back-story into the present.  That notwithstanding, it does not hurt the transitions all that much.What is interesting is the goal of the Resistance Movement.  Their bible, referred to as the Book of Noah, also Red-Listed, plays an important role in underground’s drive to overthrow The Confederation.  We finally learn about the oft referred to book in the final chapter.  We also come to understand that the recalcitrant citizens long for a government only so large as to be run by the people to serve their basic needs—a government that includes a Bill of Rights.  Where have you heard that before?The Adams character is interesting and believable, particularly because of her frailties and indecisiveness.  She never really comprehends the magnitude of the power she possesses, which makes the reader often unsure whether she can deliver or not.  I enjoyed the book; it’s entertaining and thought-provoking at times.  As a first-time novelist, Laura Bynum has shown she can write with the best of them.