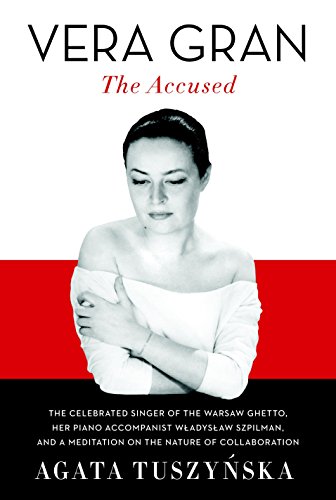 “Agata Tuszyńska has written a fiery portrayal of lives lived in horror as well as an exploration of the profound question of who really did collaborate with the Nazis.”

Before and during World War II, Vera Gran, an exotic Jewish vocalist from Poland, captured the hearts of Warsaw theatrical fans.

Her deep, sensuous voice brought Marlene Dietrich to audiences’ minds. In the 1930s, Gran became a regular and well-known contemporary stage voice, often accompanied by Władysław Szpilman, a man made famous by Roman Polanski’s Oscar-winning film The Pianist, based on Szpilman’s memoir.

The German army swiftly conquered Poland in 1939, driving the Jewish population into a walled-in ghetto in Warsaw. It was forbidden for Jews to leave. Inside, food, clothing, and medical care were scarce.

Since most Jews were unemployed, as well as unable to leave the ghetto, their only source of entertainment was themselves. Musicians and vocalists appeared in theaters and nightclubs inside the ghetto.

It was in this environment that Ms. Gran became famous.

She used much of her wealth from singing to help orphaned children. After the war began, she married a physician who had a practice on the outskirts of Warsaw.

As the Holocaust intensified, Warsaw ghetto Jews were regularly transported to concentration and death camps, primarily Treblinka, where tens of thousands of innocent families were murdered. Everyone in the ghetto had heard stories of Nazi death camps and fearing deportation, Ms. Gran left the ghetto with her husband to live where he had a medical practice in a suburb of Warsaw.

Shortly before leaving, Ms. Gran was approached by a known Gestapo agent within the Jewish ghetto. He asked her to perform for two hours one evening at the home of a wealthy family.

A Jew in the Warsaw ghetto did not refuse a request from the Gestapo or one of their agents. Such behavior would undermine the position of almost every Jew and lead to deportation or worse. Understanding this, Ms. Gran agreed to sing the one time. At the home of the performance were Nazi SS officers, Gestapo agents, German soldiers, and locals who collaborated with the Gestapo. Fearing offending this crowd, Ms. Gran sang and left as quickly as possible.

Unfortunately, people within the ghetto witnessed Ms. Gran being asked to perform for Nazis and saw her and entering and leaving the home where the performance occurred.

Warsaw ghetto deportations to death camps continued until the ghetto was liquidated by the SS in April and May, 1943. During this time, Ms. Gran’s mother and sisters were murdered. She never heard about them or saw them again. This created a long-standing mountain of guilt that remained with her for the rest of her life.

Ms. Gran remained safe from persecution and deportation outside of the ghetto, where she significantly reduced her visibility by living in her husband’s doctor’s office. During this time, Szpilman and a few other Jews managed to escape and survive in hiding—as was reflected in the film, The Pianist.

Following the war, the singer and the accompanist, each of whom had lived a harrowing story, were met with opposing fates: Szpilman was celebrated for his uncanny ability to survive against impossible odds, escaping from a Nazi transport loading site and smuggling weapons into the Warsaw Ghetto for the Jewish resistance.

After the war, however, Ms. Gran was accused of collaborating with the Nazis and denounced as a traitor and a “Gestapo whore.” She was reviled by survivors who had seen or heard that she was a Nazi collaborator.

She was briefly imprisoned and interrogated by the free Polish government shortly after the war. Ms. Gran was ultimately exonerated after years of continued accusations, denials, and finally, a trial of sorts.

Afterward, Ms. Gran was shunned as a performer. The radio station that had been partially responsible for making her famous was operated by several of her accusers. While Szpilman was one of those in control, it is not clear whether he condemned her as a traitor. Mixed messages from him led to her trial. Yet within the trial, his testimony appeared to exonerate her. Regardless, the attention drawn to her as one of the accused ruined her career, effectively sentencing her to death without dying.

Many years later, Ms. Gran was “discovered” by author Agata Tuszyńska, acclaimed poet and biographer of, among others, Isaac Bashevis Singer, Nobel laureate. Over a period of years, Ms. Tuszyńska painstakingly won the trust of the once-glamorous former singer, now living in a basement in Paris—elderly, bitter, shut away from the world.

Ms. Tuszyńska encouraged Gran to tell her entire story, including her seemingly inexplicable decision to return to Warsaw to be reunited with her family after she had fled Hitler’s invading army while knowing she would have to live within the ghetto walls and, to survive, continue to perform at the popular Café Sztuka.

At the heart of the book is Ms. Gran’s complex, burdened relationship with her accompanist, Szpilman. They performed together month after month for the many that came from within the ghetto and outside its walls to hear her sing.

Ms. Gran later describes for the first time what she calls Szpilman’s shockingly close friendship with Gestapo agents from the infamous Jewish police and describes the day she escaped from the ghetto, witnessing Szpilman’s slender hands, the same hands she saw each night on the piano keyboard, pushing other Jews onto the transport that would take them to the camps and to their death.

One person’s accusation leads to another’s. The major casualty here is veracity.

The reader is left wondering which account to believe; however, if Ms. Gran’s only crime was to perform once for two hours at a house with Nazi and Gestapo officers and sympathizers, when the risk of rejection was potentially fatal, then she is not to blame. Certainly her accusers would have made the same decision.

Yet the mere accusation took on a life of its own. The hastened tribunals of post-war Poland more resembled a mendacious witch hunt rather than a legitimate legal process. In an eagerness to punish someone/anyone, such court cases were often trumped up based on innuendo and embellished by unsound accounts from shaky witnesses.

Using Vera Gran’s reflections and memories, as well as archives, letters, statements, and interviews with Warsaw Ghetto historians and survivors, Agata Tuszyńska has written a fiery portrayal of lives lived in horror as well as an exploration of the profound question of who really did collaborate with the Nazis.

She examines the price of survival and the darkness cast in its repercussion. For what price would we acquiesce in order to live?

Agata Tuszyńska has an evocative and succinct writing style that allows the reader to feel the terror of life in the Warsaw ghetto without feeling bogged down. At the same time, her painstaking, extensive research represents a vast depository of knowledge of her subject and circumstances, producing a document that reflects upon every aspect of humanity, from apprehension, persecution, and sadism to compassion, courage, and trust.

Whether we believe the veracity of the account produced by Ms. Tuszyńska or suspect Ms. Gran’s behavior as more than compromising, Vera Gran: The Accused is an excellent interpretation of life as a talented Jewish vocalist in the Warsaw ghetto and the extent to which people will go to survive.

Vera Gran is also an exposé on how rumors can destroy lives, innocent or not. Agata Tuszyńska presents us with the inhumanity of mankind and its effects upon innocent people. One such person, caught in the web of Nazi intrigue for one night spent the rest of her life defending her soiled reputation.