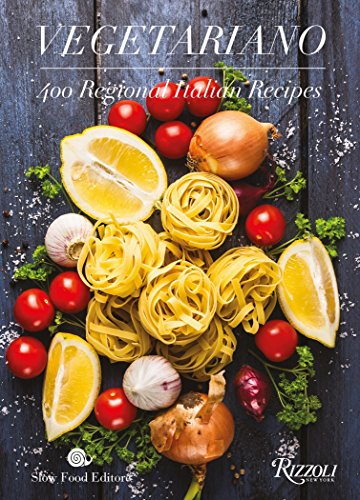 “go ahead, indulge yourself in a trip to Italy while you’re waiting for spring to arrive. Vegetariano is just the ticket.”

In Italy, vegetables often take center stage. So as our appetite for cookbooks that are vegetable centric continues to grow, it is only natural that we might turn to Italy for inspiration.

And who better to be our guide than the good people of Slow Food, the global movement that began in Italy in 1986 as a reaction to the opening of a McDonald’s at the base of the Spanish Steps in Rome.

Steeped in the traditions of Italy’s many and varied regions, Vegetariano offers a wide variety of vegetable dishes that may surprise many who think of Italy as a monolith. And while all 20 regions are represented in the pages of Vegetariano (from Abruzzo to Veneto), a regional map of Italy would have enhanced the experience of the book considerably.

That said, the regional variations in vegetables and recipes is astonishing. Discovering so many recipes from the Trentino region in the north using sauerkraut and cabbage, for example, was among the many surprises. If you are looking for something new and different to try with humble ingredients that are widely available, this book is worth considering, with one important caveat: like many European recipes, they are written rather loosely as if handed down from one generation to the next after watching your mother or grandmother make the dish.

Absent from many recipes are specifics on kitchen equipment, like the size of baking dishes or cooking pans that you would have learned at the elbow of your mother in the kitchen. But as a home cook far removed from the source those missing details can be maddening.

For example, there are too many instructions like this: “Butter a baking pan.”, or “Divide the mixture among 4 single-serving earthenware baking dishes.”, or “Roll out the dough and use it to line a pan with an inch or two of dough hanging over the pan.” What size, please? I made the Escarole and Mozzarella Cakes and was at a loss when figuring out the size of those “single-serving earthenware baking dishes.” I stuffed the mixture into 6-ounce ramekin dishes and hoped for the best. (Happily, it worked.)

The organization of Vegetariano is like most cookbooks, grouped by course from soups to desserts with specific chapters on Italian-specific entries like crostini, pasta, polenta, frittata and pizzas. But what you won’t find is an index organized by vegetable, so if you forget which chapter included the recipe for Potatoes with Melted Cheese, you are out of luck. Instead what you will find is an index of recipes by region, which is interesting, but not really helpful when you are looking for recipes by vegetable.

Take the time to delve deeply into each chapter and what at first seem like overly complicated dishes will yield some surprisingly simple recipes that are far from the ordinary. (This is one of those cookbooks that lends itself especially well to bedtime reading—just keep some stickies on hand for marking all the recipes you will want to try.)

Carrots, for example, can so easily be overlooked in your fridge and rarely thought of as a cooked side dish to a meal. But Carrots Simmered in Sweet and Sour Sauce will make you think twice about that heretofore lowly vegetable. The recipe comes from the Veneto region, whose capital is Venice. Not surprisingly there are raisins (the sweet) and white wine vinegar (the sour) involved. And pine nuts. Not to mention cooking the rounds of carrots in a generous amount of olive oil to start with—a given in Italian cooking. It was terrific and a wonderful accompaniment to salmon (or any fatty fish).

Whip up the Potato Puree with Kale and you will have found yourself a way to sneak in some greens without your picky eaters raising an eyebrow. (However, while the recipe helpfully instructs you to blanch the kale first it does not suggest cutting out the rib, which is too tough and chewy for this recipe).

There are many, many recipes to try once the spring and summer vegetables start coming in. And for those who like to preserve their summer bounty, there are loads of quick pickling recipes like Green Peppers Preserved in Vinegar as well as those that are preserved in a combination of oil and vinegar like Garlic Scapes in Olive Oil.

Because of its numerous omissions, Vegetariano is not as user-friendly as it might have been. Still, there’s plenty in the book to keep you occupied for a whole year’s worth of cooking through the season. So go ahead, indulge yourself in a trip to Italy while you’re waiting for spring to arrive. Vegetariano is just the ticket.