On Vegetables: Modern Recipes for the Home Kitchen 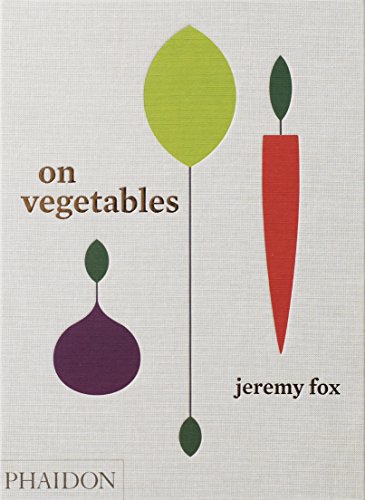 It is a well-known adage that cookbooks written by renowned chefs are best enjoyed in an armchair far from the kitchen lest the home cook end up in a pool of tears when trying to execute one of its recipes. With that in mind, On Vegetables, written by Jeremy Fox (the award-winning California chef who previously ran the Michelin-starred Ubuntu in Napa), does not disappoint.

Published by Phaidon Press, On Vegetables is a beautifully constructed book with gorgeous photography that any cookbook connoisseur would appreciate. Cooking from it, however, was, well, challenging. And not challenging in the sense that the recipes were too precious. It was challenging in that it took considerable effort to find a way into the book and discover what might work for the average home cook.

Despite its simple name, On Vegetables is not a cookbook that offers a stable of simple recipes to execute on busy nights. After perusing all the enticing photos that helpfully accompany every recipe, the reader will discover that nearly all the recipes list among the ingredients one of the many—let’s call them—embellishments, whose recipes are provided at the back of the book in the section called The Larder.

At this point the home cook will begin to feel the weight of a professional restaurant on her shoulders, will close the book and vow to start over again tomorrow.

Dig deeper though—and it really did take starting over again more than once—and there are some hidden treasures. One of which had nothing to do with vegetables at all but is a terrific dessert to put in your back pocket that is easy to pull off and yet has a distinct wow factor.

Bananas, Crème Fraîche, Honey & Curry Cashews was deeply satisfying. About the only step you need to prep in advance is the curried cashews. (Of course, you are directed to the recipe for making your own crème fraîche on page 278, but life is short and there are plenty of artisanal brands of crème fraîche to be had out there that will do just fine.)

Mr. Fox also threw in an easy lentil dish (well, if you omit the rutabaga which is not commonly sourced everywhere and use ready-made garlic powder) as a kind of tribute to his mother who used to serve him Progresso lentil soup. Lentils, Garlic & Parmesan made me fall for Jeremy Fox. It was a kind of tacit acknowledgement that if you are going to write a cookbook for home cooks, you ought to include something they can easily tackle.

But back to the real subject of the book: vegetables and their embellishments. Going out on a limb, The Larder is the real meat (sorry vegetables) of this cookbook. Indeed, Mr. Fox himself writes, “Building a larder from scratch may be the most important thing you ever do in your kitchen.” This is the section where you will find the recipes for pesto, romesco, mayonnaise, miso bagna cauda, compound butter, stocks and much more. This is also where the buzz and thrum of the professional kitchen starts to get really loud in your head.

For one thing, the quantities seem excessively large, even with proper storage suggestions. Using an entire pound of butter for the Calabrian Chili Butter even with the notation that it will freeze well for up to two months sounds like you would be eating it every night during corn season. (Which, come to think of it, may be just what you want.)

I ended up making the Miso Bagna Cauda and halved the recipe. I used it in the Charred Whole Broccoli with Miso Bagna Cauda and still have more than a cup left over that I will need to use over the next two months. (And what a strange looking sauce it is. If you make it, don’t let your guests see it. Because the miso doesn’t combine with the oil what you end up with is a broken sauce that resembles something akin to an alien being floating in an olive oil bath. My advice is to put the leftovers in an opaque container to sit in your fridge lest your family freak out every time they open the door and see it.)

The quantities notwithstanding, the other way you know you are working with a cookbook written by a professional chef is in the directions. What is obvious to a chef may not be so obvious to a home cook.

Take the Miso Bagna Cauda for example. The recipe calls for two lemons, seeded and diced. It does not say “peeled” so it wasn’t clear. The sauce is heated in a double boiler so does that mean the skin should stay on? I opted to slice the lemon in ¼ inch rounds and then cut off the peel before dicing.

It also wasn’t exactly clear what to do in the recipe for Pickled Ramps. It being wild ramp season where I live, this recipe seemed like a must-try. Being a novice at pickling, though, it would have been nice if he had been more specific about how tightly to pack the ramps or had given an indication of the size of the jar that was suitable. He also didn’t list water as an ingredient but in the directions he tells you to add one cup of water to the pickling liquid before you heat it. He says to simmer the liquid but for how long, I wondered. Finally, it calls for one pound of ramps—but is that one pound trimmed or untrimmed?

Still, it was fun to discover a new way to use ramps that grow so abundantly this time of year.

Which really is the thrust of On Vegetables. It may sometimes be maddening, but ultimately it provides some deliciously novel ways to eat your vegetables.