The Vatican Princess: A Novel of Lucrezia Borgia 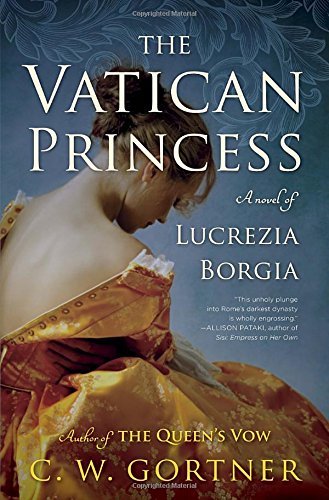 The Borgia name conjures up larger-than-life history, sumptuous banquets, sexual license, and infamy. Told from Lucrezia Borgia’s perspective, The Vatican Princess is the story of Lucrezia’s life and political marriages. This is a bildungsroman set in Renaissance Italy and centered on a dangerous family bent on doing anything for power, including manipulating one another.

Unfortunately Gortner doesn’t entirely rise above speculation made about the Borgias and instead plays upon them. For instance, without proof Gortner understandably plays upon the accusations of incest between Cesare and Lucrezia and creates a romantic fiction between them that is awkward (because it is incest and because it is written with heated prose); naturally, this is a big draw (as rumors and naughty tidbits often are) but the portrayal is lurid.

Readers meet Lucrezia as a preteen in the midst of being used as a political pawn in a planned marriage. There is nothing good to say about her other family members. Gortner doesn’t truly make the characters her own, rather they are stock characters of mythology: cruel and scheming people.

While this historical fiction novel is largely of Gortner’s imagination, the author does consult some secondary sources for information about the characters and places. Unfortunately the sources Gortner uses are a bit outdated given the plethora of research on the Borgias and Renaissance Italy the author could have consulted, not to mention the primary resources that could have given some more insight into motives or thought processes of the various family members. Anyone interested in the Borgia family would do better to read nonfiction than rely on historical fiction for their facts. However, readers familiar with the stories and mythology of the family will find familiar content in Gortner’s novel.

Syntactically, the prose lacks rhythm and the narrative ends up choppy and awkward in its short sentence structures where it would’ve been better to have a complex sentence. Entire sections of nothing but dialogue with accompanying dialogue tags are the movement of the story and become tedious. Though the dialogue was updated for contemporary readers, the stilted formality in an attempt to suggest high fantasy or the Renaissance just doesn’t do the characters justice—it makes them sound clunky and overly dramatic.

Gortner’s prose is like Laurence Olivier’s acting of Othello on film: the prose tries to be bold and dramatic and comes across as just trying too hard in a medium it’s not meant for. In Gortner’s case, this novel reads like one of several improved drafts that has yet to undergo some final editing with work specifically on prose and integrating the senses. Readers will be disappointed with the potential in The Vatican Princess that was never realized, which is surprising given that C. W. Gortner’s blog suggests an author intimately familiar with the time period and content.

This is a book that will be polarizing, despite the prose and style: Readers will either be enamored on the gorging excesses of the Borgias or they will be repulsed by the sensationalized and fictional details. Fans of Philippa Gregory’s Tudor series will likely fall in love with Gortner.