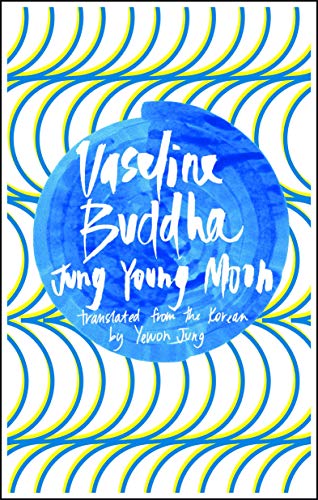 A botched break-in kickstarts a novel that skirts between fiction and autobiography. In a series of free associative passages, the novelist ruminates on travel, relationships, and memory.

Vaseline Buddha by Jung Young Moon reveals that the wall separating fiction and nonfiction is porous. Mr. Jung was born in Hamyang, South Korea and received a degree in psychology from Seoul National University. Besides his novel writing, Jung has also translated the works of John Fowles, Raymond Carver, and Germaine Greer. These autobiographical details make him more than qualified to write such a cerebral novel. Or meta-novel or anti-novel, since Vaseline Buddha not only works as an effective narrative, but as a fictional piece exploring how fiction is manufactured from the raw material of the mind.

Yewon Jung translated Vaseline Buddha. Her translation adds another fold (or complication) to an already slippery conceptual novel. But she is up to the task, making an otherwise boring or pedantic premise a compelling page turner. Mr. Jung’s voice propels the narrative forward even as it alternates among different locations and different time periods.

Most of the novel sounds like this. In the above paragraph the repetition of “everyday life” becomes oddly incantatory. The repetition can lull the brain into a stupor, yet simultaneously, it draws out these wonderful observations about the extraordinary moments that occasion every mundane existence.

The novel’s premise is a simple one. It is a novel about a novelist wanting to write a novel. Unlike the postmodern comedy of Gilbert Sorrentino’s Mulligan Stew, Jung records the moments of his thoughts as he is having them. Or at least the novelist character in the novel. It remains ambiguous whether or not the novelist character is Jung Young Moon. The character is never named. Events occur in the novel and it is never clearly stated whether these events were autobiographical in nature.

The novelist in Vaseline Buddha wishes for someday to write a novel called Vaseline Buddha. Yet Vaseline Buddha is clearly a novel and not a memoir. It plays with the human desire to classify things and to place things in its specific taxonomic box.

Jung balances two opposite ideas as the novel careens from one free-associative monologue to another. The first is that the novel, like any other piece of fiction, is a human construct, a fabrication, a fake. The second is that the novel is a precious repository for human memories and desires, a record of relationships, travels, and ideas.

He creates a narrative about creating a narrative as the narrative is being created. Expressed like that, it comes across as a description of tedious avant-gardist solipsism. It is solipsistic since the subject is Jung himself, but he does so with a combination of merciless self-examination and fabricated storytelling.

He blurs fiction and autobiography to create a novel reminiscent of works by W.G. Sebald, Vladimir Nabokov, and J. G. Ballard. The novelist and the main character aren’t at ends of a spectrum but are part of the same Moebius strip.

Vaseline Buddha is a brilliant example of contemporary South Korean literature. In the crowded field of experimental literature, Jung finds a way to plumb the depths of human experience.