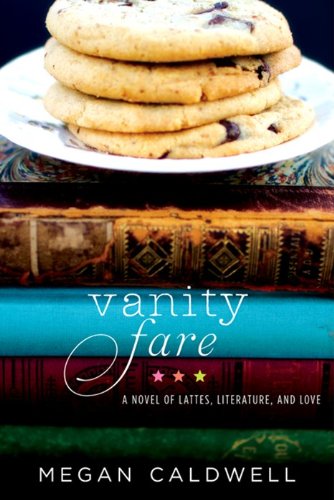 “As a novel about a woman putting her life back together after a midlife crisis, Vanity Fare is a fun, witty book with an engaging heroine.”

It’s not easy starting over at forty.

Just ask Molly Hagen. After her husband trades up for a younger model and reveals he’s recently lost his job, Molly is left holding the bag for the care of their six-year-old son. Thrown a lifeline by an old college friend, she hopes to parlay a once in a lifetime opportunity to write copy for a new restaurant into a new career.

Encouraged by her friends, burdened by her mother, and pursued by multiple men, Molly is just trying to hold on.

Vanity Fare is a froth of a book, light and quite witty at times. Ms Caldwell makes it easy to empathize with her main character. Molly is determined to care for her son in the best way she can. She’d also like to hold on to some shred of dignity along the way, which isn’t always easy in the midst of financial worries.

Ms. Caldwell does a fantastic job of creating an Everywoman with whom nearly any woman in the western hemisphere can identify. Molly has body issues, self-image issues, and money issues. She depends on her friends for a listening ear, loves her son fiercely, and would like nothing more than to get just a little more rest. Childcare problems become abutted by mom care problems, a situation with which any “sandwich generation” woman will identify.

Molly tries to face it all with humor and as much patience as she can muster.

When Ms. Caldwell is focusing on Molly’s life and self-esteem rebuilding, the book is believable and very enjoyable. It was easy to empathize with her as she comes to terms with her husband’s betrayal, both emotional and financial, and satisfying to see her move beyond dependence to independence. Her interactions with her son, ex-husband, and her friends leave no doubt that she will ultimately prevail.

Less satisfying are the secondary characters. They tend to be one note, aside from her son, Aidan, who is quite charming and very much a six year old. The ex is pure wimpy villain, the mother snobbily daft, the friends sketched and then left fleshless.

Most baffling are the romantic leads: Simon, the charming, rakish baker who is opening the store; John, her long-time friend; and Nick, Simon’s broody, heart-of-gold business manager. Admittedly, the potential romance with John is abandoned early on, but it is clearly implied near the beginning that his interest is more than friendly.

Simon is the one upon which Ms. Caldwell devotes the most time and attention; he pursues Molly from the first, though it’s never clear exactly why he jumps in so hot and heavy. There’s a vague mention that she’s the type of woman of whom his mother would approve, but it’s never explained at any satisfactory level why that is such an issue. Is he a mama’s boy? Is he looking for an inheritance? Has he had a bad relationship? That story arc is abandoned before any answers are revealed. We also have a last minute play for her affections by the ex that is as Rom Com as anything I’ve ever read.

There is a clear impression left that this was conceived and written as a longer story from which chunks have been excised. The best indication of that is between chapters 17 and 18: At the end of 17, she turns down a dinner invitation with Simon then puts her son to bed and is thinking about how glad she is to have him, if nothing else. Chapter 18 begins in the middle of a conversation with Simon, wherein she is again turning down the same dinner invitation and at the same time breaking up with him. They never were really together in the current manuscript.

In a later chapter, Molly wonders if Nick knows she and Simon are no longer an “us;” they never are an “us” in this book. Editing down a book is understandable; shoddy rewrites and weak editing are not.

As a novel about a woman putting her life back together after a midlife crisis, Vanity Fare is a fun, witty book with an engaging heroine. Vanity Fare as a romance novel doesn’t work at all; it falls apart in the second half, becoming disjointed and implausible. And that’s a darn shame.