The Vanishing Type (A Secret, Book and Scone Society Novel) 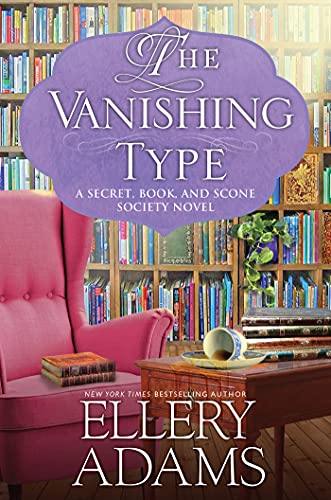 “Adams provides the red herrings, the foreshadowing, and the clues we need to pick out the murderer, and yet she turns some sharp corners that cause us to question their decisions.”

In her new book, The Vanishing Type, Ellery Adams gives the reader the full cozy treatment. Her heroine, Nora Pennington, has transformed an old train station into a bookstore with all the comfort of both books and trains.

Her “Secret, Book, and Scone Society” members, Hester Winthrop, Estella Sadler, and June Dixon provide the small town of Miracle Springs with the requisite bakery, salon, and inn. Life is good in Miracle Springs until unexpected events begin to happen when a classic book, The Scarlet Letter, is damaged, drawing attention to the character, Hester Prynne. Does this point a finger at society member, Hester Winthrop? Nora becomes concerned.

When Hester gets engaged to deputy Jasper Andrews, the society members’ concern rises because Hester has a secret she has shared with them, but not with Jasper. Two decades earlier, as an unmarried woman, she gave birth to a child whom she gave up for adoption.

On a walk through the local forest, Nora considers the damaged book and Hester’s secret, when she encounters the local police at the scene of a crime, with a dead man at their feet. In the dead man’s pocket is a rare book published in the early 20th century—a book of the Lady Artist Books series. The book tells the story of a lady with the name of a flower: Delphinium.

How odd, Nora thinks. But odd does not come even close to describing how she feels when a second in the series, with another female character with the name of a flower, appears at her bookstore. Could this have anything to do with the damaged copies of The Scarlet Letter? Again, she wonders, how odd.

Adams brings new characters into the story in the person of Lea Carle, the nanny for Jeffrey Comfort, son of Miles and Meredith Comfort. Lea loves to bring Jeff to the bookstore where they participate in the reading series led by employee Sheldon Vega.

While the identity of the dead man remains a mystery, a third in the series of Lady Artist Books appears, ramping up Nora’s curiosity. Her romantic interest, Sheriff Grant McCabe, steps into the story as Nora shares information about the additional books in the series that have begun to appear—the series originally found in the dead man’s pocket.

Adams does an admirable job of keeping Nora involved in the investigation while working with, instead of against, local law enforcement.

The fourth book in the series makes an appearance when Lea’s employer, Meredith Comfort, offers her recently deceased mother’s rare book collection to Nora for the bookstore and one of the books is #4 in the series. As Nora gives closer attention to these books, she believes there is a connection, but what is it?

Here Adams begins to knit that connection closer together when Nora contacts a friend in New York, an expert on rare books, and it is discovered that on the cover of each of the books is hidden a letter. As each letter is uncovered, it is up to Nora to determine what, if any, word is spelled out and how it relates to the dead man, and possibly to Hester.

Adams gives the red herrings, the foreshadowing, and the clues we need to pick out the murderer, and yet she turns some sharp corners that cause us to question their decisions right up until the very end when the culprit is uncovered.

A well-presented cozy mystery that any lover of the genre will enjoy reading.