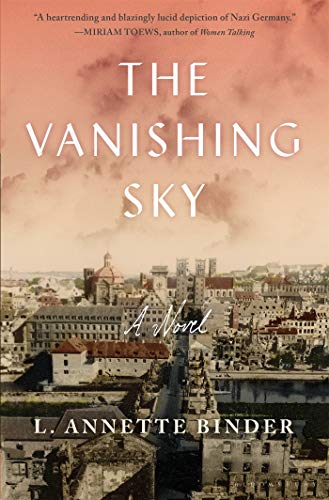 “a haunting portrait of a nation slowly collapsing . . .”

The Vanishing Sky is a novel that takes place during a European war in the 20th century. But with fewer than a dozen references to Hitler or Jews, it could be set in almost any country from Spain to Russia, during almost any war.

The bombers roaring overhead, the ration cards, the lack of butter and meat—that could be Britain in World War II. The false optimism of the official radio broadcasts amid the population’s growing sense of doom evokes almost any besieged dictatorship.

That universality is both a weakness and a strength of the book.

As author L. Annette Binder piercingly describes the mood of the inhabitants of the small Bavarian city of Wurzburg, just weeks before World War II ended: “They sat home and waited, they didn’t know what for, and all around them a strange sound worked its way through the walls and into their darkened kitchens. It pulsed from beneath the streets and inside the building walls, steady as a heartbeat, that intake of breath and the release.”

In fact, the milieu of The Vanishing Sky is Germany in late 1944 and early 1945, as seen mainly through the eyes of two alternating narrators:

Etta Huber is a housewife and mother in the town of Heidenfeld, about 25 miles from Wurzburg. She obsessively cleans her tidy house as though that could restore her prewar family, while her husband, Josef, a retired schoolteacher, descends into dementia.

For a brief moment Etta’s dream seems possible, when her elder son, Max, is inexplicably sent home from the Eastern front. But Max is suffering from what we now would define as post-traumatic stress disorder. He laughs at odd times, spends entire days wandering the streets, and bursts into loud Latin and Greek in the middle of the priest’s sermon. Falling to the floor in the kitchen, “he rocked from side to side without speaking, his face marked by an anguish that [Etta] had never seen before . . . He began to moan, an animal sound from low in his throat.” Then one day he is gone.

Meanwhile, the other primary narrator, 15-year-old Georg, the younger Huber son—chubby, adept at magic tricks, and closeted even to himself—has been sent off to military training with the Hitler Youth. As the Allied forces push deeper into Germany, he and his teenage classmates are conscripted to build a useless defensive wall and then to fight.

One moonless night, while his comrades sleep, he jumps out of the truck transporting them to the battlefield.

“Keep Josef in his woodshop,” Etta thinks, “and keep Max by the [river] banks and Georg in his room where he was happiest. Keep them all in their places and let the sun never set.”

Through these narrations—Etta’s daily struggles and sad longing, Georg’s useless military training and stumbling odyssey through the desperate countryside—The Vanishing Sky paints a haunting portrait of a nation slowly collapsing. The story is gripping, and the characters are fully realized, flawed individuals.

Binder has called the book “a letter to my father,” who had joined the Hitler Youth—essentially mandatory during the Nazi era—and never talked about it even until the day he died.

Perhaps, by making the fictional setting so generic, Binder, a prize-winning short story writer, hoped to explain how her father was able to participate in such mass cruelty. Under similar authoritarian control, how many readers of any nationality would have had the courage to resist?

Yet there’s something troubling about the idea of ignoring the extreme evil of the Third Reich. If this novel aims for universality, then it’s important also to remember that many “ordinary” German adults – not just impressionable teenagers, not just cowed victims -- avidly cheered Hitler and beat up their Jewish neighbors, long before Nazi control was firmly in place. Indeed, they voted for him in 1932 when Germany was still a democracy.

Our common humanity doesn’t always manifest in ways to be proud of.