The Vanishing Princess: Stories (Art of the Story) 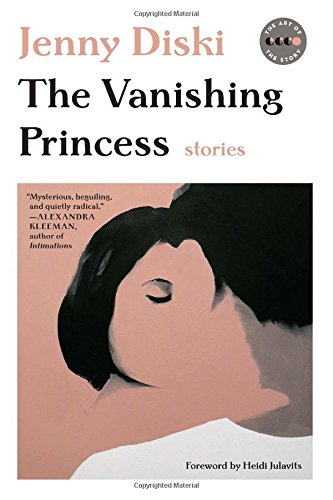 Jenny Diski’s short stories are often unsettling, describing in minute detail the troubled thoughts that accompany her characters’ everyday activities as they go for a lunchtime walk, take a bath, or catch the underground train home. Her only short story collection, The Vanishing Princess, is published in the United States 18 months after hear death from cancer in April 2016 and explores “the subjects of sex, power, domesticity, femininity, hysteria and loneliness.”

Diski’s characters often transgress norms, either through their actions or only in their own minds. In “Short Circuit,” a story focusing on a woman who is convinced that her lover is cheating on her despite no supporting evidence, the prose is adept at conveying the tense, suffocating mind-spiral of the anxious and paranoid, but conveys little else;

“The swings of conviction—he is seeing someone else—he most certainly isn’t—came around several giddying times a day. Sometimes Lillian felt as if she were going mad, but there was nothing made about her thoughts in either state of mind. They were all too logical. It was only the persistence and see-sawing that had the quality of madness.”

This intricate analysis of the character’s constant troubled thoughts goes on for 17 long pages, with little in the way of narrative progression. While many can surely relate to these feelings, it offers nothing more in those tedious pages than what a writer with Diski’s skills can establish in one.

Similarly in “Leaper” Diski describes the thoughts of a woman whose plans change when another  woman jumps in front of a tube train. The character suffers from anxiety, and although Diski gives the reader as near a perfect summary of that condition as any (“All the time, even in the midst of the panics, I knew it to be a free-floating anxiety, its source a well of terror in me that had nothing to do with my chosen concerns”) the story isn’t convincing as a whole.

Her characters sometimes bring to mind the old cliché of the Neurotic Woman, which was of course a sexist construction anyway, used to belittle female unhappiness along with genuine mental illness.

She is more successful when we come out of the endless first-person description and her character’s mental health is given the context of a place and a cast of characters, evoking a particular place in time and the attitudes that come with it.

In “Strictempo” Hannah, a teenager in a mental institution in England in the late 1960s, takes a small pleasure from dancing with her fellow patients on a Friday night. Failing to fit into boarding school or take to employment in a series of shops, a suicide attempt has led to her being in the care of the state. As she observes her fellow patients, through her eyes we get a sense of those old institutions, where one transgression could lead to a young person being forgotten about and locked out of society for many years.

The title story offers a change in style, and is reminiscent of Angela Carter or Jeanette Winterson, evoking a style of magical realism or feminist fantasy. Diski offers a Repunzel influenced parable centering on a princess in a tower that explores the male gaze.

However, instead of one soldier hacking through the forest to her rescue, she begins to receive visits in her tower from two men. Between them they ruin her solitary contentment, introducing a mirror and a calendar. This brings her vanity as well as expectation and disappointment. When they stop visiting, the Princess no longer feels she exists; “I’m not here, she said to herself. ‘Perhaps I never was.”

While Diski is a good stylist and an interesting storyteller with flashes of brilliance, this collection varies in quality and lacks purpose. It is likely to appeal most to those who already appreciate her novels or journalism.