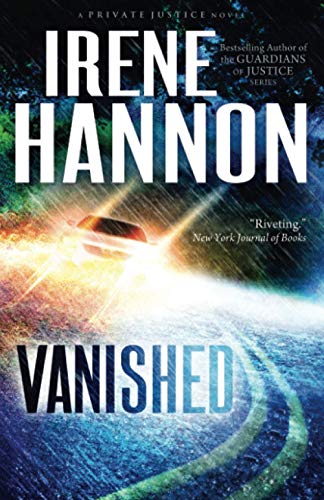 “. . . one of those addictive books that once started, compels you to shut out the world till you reach the very last page.”

A touch of romance, a dash of suspense, and just the right amount of mystery are the perfect ingredients for a satisfying story. Vanished features believable characters and a riveting storyline, making this crime drama a great addition to the Private Justice series.

Irene Hannon opens the book with an outstanding chapter that grips like a vise and never lets go. The suspense and mystery continue to build, carrying the reader to an unexpected and satisfying conclusion.

It all starts with a single-car accident with a pedestrian on a dark, winding country road during a blinding rain.

As the story progresses, an ember of romance begins to absorb the oxygen between the novel’s two main characters, Cal Burke and Moira Harrison, until that spark finally morphs into a raging romance. Burke is a former federal agent turned private detective; Harrison is an investigative reporter. The duo team up to do a credible job of solving a puzzling mystery.

The author has done her homework, getting all of the police related terminology correct, as well as the investigative procedures and steps. Ms. Hannon’s PI never oversteps his authority and contacts the police at appropriate junctures. Well done.

Interestingly, Irene Hannon specializes in romantic suspense novels. Her past efforts have garnered a host of literary accolades. Booklist named Deadly Pursuit one of the top ten inspirational fiction titles for 2011. The final book in her Guardians of Justice series, Lethal Legacy received a starred review in 2011 from Library Journal, which praised the book for its “compelling characters and edge-of-your-seat action.” Ms. Hannon is also a two-time RITA Award winner.

Vanished is a quick read, one of those addictive books that once started, compels you to shut out the world till you reach the very last page.