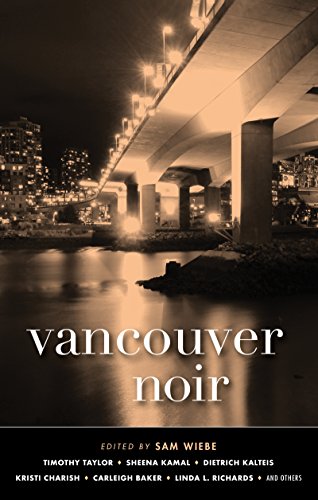 As David Byrne asserted in the classic Talking Heads song “Cities,” in which he crooned a series of quirky observations about various towns in hopes of finding a place to live, “there’s good points and bad points.”

Vancouver Noir isn’t the “bad points” per se. it’s the real points. The underbelly. The shadows. As a marketing tool, it’s doubtful that the chamber of commerce will be handing out free copies of Vancouver Noir along with its glossy brochures.

The beauty of the Akashic series of noir short story anthologies is that they offer local writers a chance to say “here’s our town.” This crop of writers, assembled and edited by Sam Wiebe, succeeds in a gritty, moody way.

The result is a kaleidoscopic flyover of a city with issues. (Like all cities.) But Vancouverites seem particularly concerned about the steamroller of gentrification and the changing neighborhood landscape; people being pushed aside.

Vancouver Noir’s 14 stories are divided in three sections—Blood Money, Rags and Bones, and Night Visions. A handy map (a fine feature of the Akashic series) helps us locate the mayhem from West Vancouver to Victoria-Fraserview.

Linda L. Richards kicks things off with a tasty, twisty entry, “Terminal City,” about a female assassin who gets up close and personal with her target. Turns out Vancouver is known as The Terminal City. “So called,” the assassin notes, “because it was the end of the line when they built the railroad. Or the beginning, depending on your perspective.”

Sheena Kamal’s “Eight Game-Changing Tips on Public Speaking” is a raw, meta entry that is laugh-out-loud hilarious. The “tips” give our narrator a chance to riff and/or meltdown over a workplace love triangle and white-collar crimes with a side helping of newfangled sexual wrinkles. What a blast.

“The Perfect Playgroup” is Robin Spano’s sparklingly dark entry set among “mom friends” and the Lululemon set in West Van. Everything is bright and sunny until it’s not. There’s a shocking bit of nastiness straight out of the canoe scene in Patricia Highsmith’s “The Talented Mr. Ripley.”

Nathan Ripley’s beautifully written “The Landecker Party” reveals casual violence and clever plotting among budding musicians who are making the switch from playing guitars to playing DJs with their laptops. The Landecker Party, it turns out, is booze that “tastes like Jägermeister with Scope and Palmolive notes.” When you throw a party, you sometimes attract trouble, particularly those you may not know, and you must deal with the consequences.

“Stitches,” by Don English, will have you thinking one thing with its shocking opener and then ease you into a mood that is only slightly less creepy. And R. M. Greenway’s “The Threshold” is a gritty story that thrives in the space between dawn and day, between art and reality, and between those precious few moments between life and death.

As Wiebe writes in the introduction Vancouver Noir, “It gets dark here. Know that going in.”