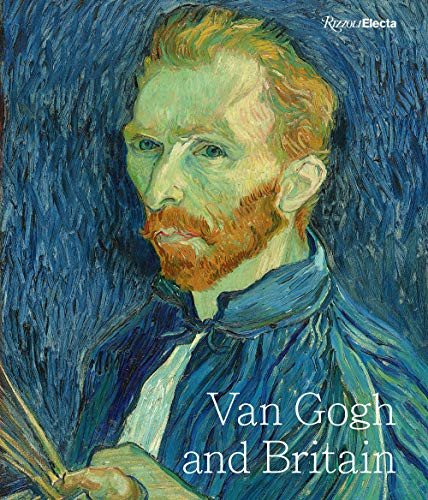 “Beautifully produced, Van Gogh and Britain adds greatly to our appreciation of the artist who created such universally beloved paintings, over 800, in just 10 years.”

Numerous biographies and biopics stress the impact of France on Dutch painter Vincent van Gogh, from his vibrant palette and expressive brushwork to his impasto paint application. Van Gogh and Britain, the catalogue for a major exhibition at the Tate, explores the artist’s far less known relationship with Britain. The longstanding portrait of Van Gogh as a tragic, alienated artist is augmented by new scholarship revealing a sensitive young man engaged with the art and culture of his day.

Edited by Carol Jacobi, lead curator of the exhibition and the Tate’s Curator of British Art, 1815–1915, Van Gogh and Britain features a series of thematic essays focusing on a formative period between 1873 and 1876 when Van Gogh worked in London.

Catalogue entries after each essay connect Van Gogh’s cultural experiences in London to his works, juxtaposing art he saw with his later paintings. As in the exhibition, the book concludes with images and discussion about Van Gogh’s importance to modern British artists.

In his opening essay “On the Road: Van Gogh in England,” Martin Bailey introduces us to the 20 year old, newly arrived in London as a trainee art dealer at the Goupil gallery in Covent Garden. Wearing a top hat, young Van Gogh immersed himself in local culture, walking and riding the city’s new underground to visit art galleries and museums. Among the works he greatly admired at the National Gallery was Meindert Hobbema’s The Avenue at Middelharnis 1689 with its avenue of alder trees, a composition he would experiment with in paintings like Avenue of Poplars in Autumn, 1884 and Les Alyscamps, Arles, 1888. Of contemporary British art, Van Gogh was drawn to Chill October, 1870 by Pre-Raphaelite John Everett Millais. Van Gogh would continue to associate the fall season with British painters.

Though Van Gogh wouldn’t start painting until age 27, he did a series of English sketches. Three of the four surviving scenes are reproduced here, including an ink sketch of Austin Friars, a Dutch Protestant church, probably enclosed with a letter to his sister.

After an unrequited love affair with his landlord’s daughter and sudden transfer to Goupil’s Paris branch, Van Gogh returned to London where he was promptly fired. After pivoting to teaching and religion, the 23 year old returned to the Netherlands, where his family described him as lonely and obsessed with religion. The melancholy that would overcome him had already begun.

In “Black and White: Van Gogh’s British Books and Prints,” Carol Jacobi addresses the artist’s enthusiasm for English books, illustrations, and black and white prints. Despite his years as a struggling artist, Van Gogh amassed an astounding 2,000 engravings that helped him develop “a distinctive and forceful graphic language that was as important for his painting as his drawing,” writes Jacobi. Among the prints he owned was Gustave Doré’s Evening on the Thames, the river he had often sketched from the Embankment. Doré’s landscape along with Whistler’s Nocturnes influenced the first of Van Gogh’s two spectacular night landscapes, Starry Night, 1888.

Van Gogh spoke and wrote English well, one of four languages he knew.  According to Jacobi, “Van Gogh equated written and pictorial arts, and the English language had implications for his style too.”

In a nod to one of his favorite authors, Van Gogh tried to achieve a Dickensian effect with his portraits. “My whole life is aimed at making the things from everyday life that Dickens describes and these artists draw,” he explained. In 1890, the last year of his life, Van Gogh included a book by Dickens in the foreground of his portrait L'Arlésienne.

Prints supplied Van Gogh with subjects to paint when he was too ill to go outside, explains Jacobi. In the last months of his life in the Saint-Paul asylum, he painted his only image of London, Prisoners Exercising, 1890, after Doré’s print Exercise Yard at Newgate Prison, 1872, one of over 30 prints in his collection related to prisons, a subject he identified with strongly. “Black and white pictures— accessible, exchangeable, comparable—suited the artist’s way of thinking, and their imagery could merge with literary ideas, aiding Van Gogh’s singularly creative and synthetic approach to his sources,” concludes Jacobi.

In “The Sunflowers are Mine: Van Gogh’s Sunflowers in Britain,” Martin Bailey explores the series of celebrated, influential Sunflowers and how these “deceptively simple paintings” led to a bloom of British flower painting.  Astonishingly, Van Gogh painted the first four of the famous still lifes in one week during August 1888. “I work on it all these mornings, from sunrise. Because the flowers wilt quickly and it’s a matter of doing the whole thing in one go,” Van Gogh wrote his brother Theo.

He hung the last two versions in the guest room of the Yellow House for artist Paul Gauguin’s October visit to Arles. Van Gogh would make three more copies in January 1889, a few weeks after being hospitalized during a mental breakdown when he cut off his ear. The last of his four August canvases wound up at the National Gallery, London, acquired in 1924 from Van Gogh’s sister-in-law.

In their fascinating essays, Chris Stephens and Hattie Spears examine Van Gogh’s reception, exhibition history, and recognition between and after the two World Wars. After being condemned by the Nazis as degenerate and un-German, Van Gogh’s life and paintings finally were regarded as the embodiment of creativity.  As Spears writes, Van Gogh’s mental illness came to represent “the artist and the individual in a hostile world.” As such, he inspired modern British artists like Francis Bacon, Matthew Smith, Christopher Wood, and David Bomberg. “Van Gogh is one of my great heroes,” wrote Bacon, “because I think that he was able to be almost literal and yet by the way he put on the paint give you a marvelous vision of the reality of things.”

Beautifully produced, Van Gogh and Britain adds greatly to our appreciation of the artist who created such universally beloved paintings, over 800, in just 10 years. As Booker Prize winning writer Ben Okri concludes in his moving essay “Van Gogh and Britain Now,” “There is a yearning in those paintings to belong to a rich wild cosmic order, to still the beating heart caught in the fury of human destiny. He is always one of us, and like us he seeks serenity.”

Susan Jaques is the author of The Empress of Art: Catherine the Great and the Transformation of Russia. She is also a member of Historians of Eighteenth Century Art & Architecture and Biographers International as well as a gallery docent at the J. Paul Getty Museum.