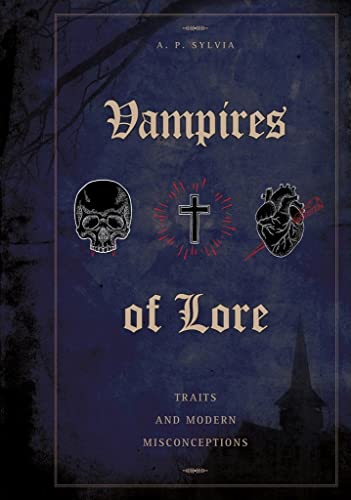 “Beautifully bound and artistically illustrated, this volume is one the writer of vampire tales or any other paranormal genre will wish to keep as a source for future reference.”

“The vampire doesn’t exist in isolation. Rather, this monster is part of a complex and sometimes quite frightening, system of beliefs. The various similarities we’ve seen among vampires, witches, and werewolves demonstrate the fluid nature of folklore. When it comes to these supernatural traditions, absolutes can be difficult to find.”

In his Preface to this nonfiction foray into the existence of the literary versus the mythic creature known as the vampire, the author states that the impetus for his writing was the discovery in New York City’s Ripley’s Believe it or Not! museum of a “vampire killing kit.”

Although listed as genuine, with another also featured at the West Coast Hollywood branch of the museum, the kit was declared by the curator of the UK Royal Armouries as being unauthentic and of fairly contemporary origin.

“It likely came into existence when vampire movies from Hammer Films were popular. (circa 1958).”

This prompted A. P. Sylvia to begin his quest to determine just how many traits of the vampire known by the contemporary public are derived from folklore and how many from the cinema and literature.

“Whatever the truth behind these vampire killing kits, they serve as a testament to the impact vampires have had on our culture. Also, as far as I’m concerned, they’re just plain cool.”

Breaking down the characteristics of the literary vampire into 18 categories—i.e., blood drinking, how to become a vampire, silver bullets., requiring an invitation to enter a house, etc—he fills each chapter with information gleaned from reading or movie-viewing, as compared to that found in folklore and mythology, verifying each fact with locations and dates.

“The vampires of popular media can be lovers, brutal killers or both but regardless of how they get it, fresh blood is essential for all of them. Although blood drinking has become inextricably linked with the modern notion of a vampire, the variety of examples discussed shows how folklore can be much more nuanced.”

A note of caution: Though carefully phrased, some of the examples cited may give those vampire enthusiasts who nevertheless have delicate sensibilities, a bit of a tummy roil or two, as well as an exclamation of, “Gross!”

Quoting Romanian and other European and also United Kingdom folktales and historical accounts of vampires, as well as the occasional werewolf where stories overlap, the author compares his findings with what authors such as Sheridan Le Fanu, John William Polidori, and of course, the Grand Old Man of vampire novels himself, Bram Stoker, tell us.

“Given that fangs are practically ubiquitous in fictional portrayals of vampires, they must be present in folklore, right? How could they not be? Well, I’ve some shocking news: Traditional vampire beliefs do NOT incorporate fangs.”

Occasionally writing with tongue deftly tucked in cheek, the author carefully footnotes his facts with meticulous endnotes, as well as a four-page bibliography.

In case, a reader thinks he has an example refuting a fact this reference states, Sylvia also puts in a caveat:

“Of course, when talking in terms of belief in the supernatural, there are no absolutes.”

Interwoven throughout is a history of the literary and cinematic vampire, from Polidori’s The Vampyre, and the serial Varney the Vampire to the vampire readers’ bible, the source to end all sources, Bram Stoker’s Dracula, and novels beyond.

Which is the winner in the “Truth About Vampires” contest?

The result is surprising, literate enough to be a thesis, perhaps occasionally disappointing to the reader (when a fact is disputed), but nevertheless entertaining and enlightening.

Beautifully bound and artistically illustrated, this volume is one the writer of vampire tales or any other paranormal genre will wish to keep as a source for future reference.