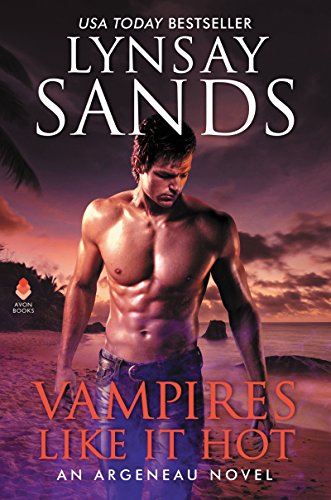 “filled with plenty of romance and laughter, rather than the expected blood and gore of a vampire tale.”

Raffaele Notte came to Punta Cana in the Dominican Republic to help his cousin Santo recuperate from being kidnapped and tortured by a madman. Until this point his main problems had been watching over Santo and tolerating the heat and humidity.

Then he notices a great many of the guests at the hotel are sporting little wounds like bite marks. Are they being preyed upon by vampires?

“He didn’t usually use that term to refer to one of their kind. It was an insult in their eyes. Vampires were dead and soulless. Raffaele and his kind were immortal, very much alive, all retaining their souls, and nowadays they stuck to bagged blood.”

That worry is swept aside when he sees a woman floundering in the surf with a shark close behind. Now there’s a damsel in distress and Raff, being the chivalrous immortal he is, goes to the rescue.

Jessica Steward is in Punta Cana for her cousin’s wedding. The last thing she expects is to find herself on a boat beyond the 12-mile limit with a bunch of pirates who are also vampires, but that’s what happens. Jess escapes and attempts to swim back to shore and wouldn’t have made it if it wasn’t for Raff.

Certain Raff and his cousins will think her crazy when she begins spouting stories of vampires, she’s shocked when they believe her. What she doesn’t know is that Raff can’t read her mind and erase the memory, and that means only one thing . . . she’s his life mate.

“The fact that he couldn’t read her while his cousins could meant she was definitely his life mate and she wasn’t crazy. Those were the only two reasons an immortal couldn’t read a mortal.”

That makes a problem, for Captain Vasco told Jess the same thing and that’s the reason he’s now pursuing her.

“‘Ye are me life mate,’ he said solemnly as if that explained everything and smiled crookedly. ‘That’s why I find you irresistible.’”

Jess is more inclined to fall in love with Raff, and does, though she hasn’t quite realized it yet. Discovering he and his cousins are of the same ilk as her ardent vampire pursuer may make her change her mind, however. Or will it?  What happens when a girl has two handsome, sexy men declaring they’re meant to love her forever—but they’re both vampires?

As with Lynsay Sands’ other creations within the Argeneau immortal family, this story is filled with plenty of romance and laughter, rather than the expected blood and gore of a vampire tale. The immortals have long ago forgone feeding on humans and are now simply trying to survive in a world where they’re outnumbered, adjusting to the lifestyles they see around them, and doing a very good job of it, as readers of any of the other stories in this series will attest.

Most of the plot centers around Raff and his cousins’ attempting to smuggle Jess out of Punta Cana and back to the States where Raff intends to woo her properly. As with all good intentions, that goes flying out the porthole when Vasco again whisks Jess away to his ship.

The confrontation between the two immortals, either of whom could be Jess’ life mate is a comic encounter instead of a bloody duel, each one pointing out his good points and his rival’s bad ones, admitting their ages—Raff was born in 120 BCE and Vasco in 1519—and trading insults in the most polite way possible. Vasco’s old-fashioned way of speaking, as well as his use of Shakespearean and other centuries-old slang for love-making—all lost on Jess—will give the more literary-aware readers a chuckle or three.

All in all, this is a lovely story, as much for its deviation from the usual run-of-the-mill vampire tale—and for that Ms Sands is gratefully thanked—as well as the humor the author shows in certain situations instead of having them fraught with dread and terror.

Vampires Like it Hot is the latest in this very successful series.