The Value of Nothing 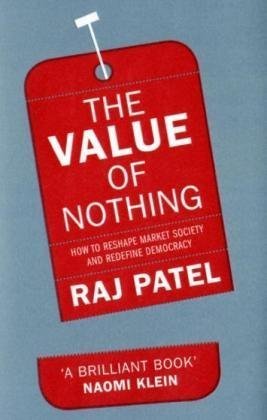 “The bishop was much struck by some of the analogies I drew.” —Oscar Wilde

There has recently been a rash of books and articles that attempt to place blame for the financial crisis. Their target is not the bankers, analysts, ratings experts, financial journalists (like this reviewer), or economists, on whom much blame justly should be placed. Instead they seek to find a moral failing in mankind for which we are being punished with recession. The combination of the biblical pattern and a traditional morality updated with “green” causes seems to bring all these writers together in a kind of climate-change-related prayer meeting.

Patel’s The Value of Nothing is very much in the tradition of the Victorian moralists, particularly those who wrote sermons—many of them graduated from Oxbridge universities as he did. Here’s a quote from Patel: “Unlike Economic Man, people value mercy, trust, altruism and reciprocation for their own sakes.”

Now consider this quote from a sermon by the Victorian cleric, the Cambridge-educated Charles Kingsley:

“Did it ever strike you, that goodness is not merely A beautiful thing, but THE beautiful thing—by far the most beautiful thing in the world; and that badness is not merely AN ugly thing, but the ugliest thing in the world?—So that nothing is to be compared for value with goodness; that riches, honor, power, pleasure, learning, the whole world and all in it, are not worth having, in comparison with being good; and the utterly best thing for a man is to be good, even though he were never to be rewarded for it: and the utterly worst thing for a man is to be bad, even though he were never to be punished for it; and, in a word, goodness is the only thing worth loving, and badness the only thing worth hating.”

In an argument of the same type as that of Kingsley, Patel warns us that we have substituted market-based price perceptions for goodness, and that is why we are being punished.

Unfortunately, that hardly represents a viable vision of the world we live in. In the real world, greed is good. Base passions like the desire to earn money make the world go round, and the real people who live in it use them not only to survive, but also to make the world better. The world needs markets and prices to make that effort work.

The crisis and recession was preceded by a wave of creativity in finance—unquestionably motivated by greed—and one that powered growth, particularly in the U.K. and the U.S. Unfortunately, the regulatory framework was unable to keep up with the fast-moving wave. Financial professionals largely expect something similar to happen again eventually, because the regulatory framework always trails innovation. As Tim Copnell, a partner with KPMG in London, puts it: “Even as regulators try to cope with these developments, new instruments are probably being developed that will pose unexpected challenges. It takes years fornew legislation, accounting rules, clearing houses, etc. to be developed that deal with these new instruments.”

But Patel, and those like him, want to turn this paradigm into a moral tale. It’s worth examining Patel’s arguments to as a means to undercut this growing tendency to meaningless self-castigation.

Market economics is at the root of our badness, Patel maintains. Citing Oscar Wilde—Patel seems to have a Cliffs-Notes acquaintance with the classics—we know “the price of everything and the value of nothing.” We have accepted the paradigm of “economic man,” whose motives are entirely based on greed, and ignored our better qualities. (The concept of ”economic man” is actually a tool for economists, not a philosophical abstraction, but Patel ignores this).

The institution that most thoroughly demonstrates how the market outlook has perverted our values is, according to Patel, McDonalds Corporation. “When companies make decisions about what they can produce and at what price, they are doing pretty much what Homo economicus is meant to do, acting as coldly rational beings motivated exclusively by profit. . . . in order for profits to be high, corporations organize workers, raw materials, capital equipment and rents so that their costs are as low as possible.”

It’s not clear why all of this is wrong, but McDonald’s should be ashamed of doing just that, Patel says. Worse still, McDonald’s has a large carbon footprint, and is also responsible for “environmental disasters, climate-change-related migration, and higher health care costs.”

Why the hamburger chain should be blamed for all this is neither documented nor quantified. All businesses produce a carbon footprint—no effort is made to show that McDonald’s produces a larger one than most businesses. Tree Huggers Ltd., a U.K. based corporation, also has a carbon footprint; surely it is as much to blame as MacDonald’s? It’s also easy to blame the company for paying low wages, but most of the companies in its sector do the same.

Of course, we all perceive the real reason to target McDonald’s: We are supposed to be ashamed of what the company produces. We, of the educated, literate crowd who dine at L’Orangerie, we can have an easy laugh at consumers of the Happy Meal. We are supposed to blame McDonald’s for causing obesity; that is the reason Patel holds the company responsible for higher health costs. Consumers, however, are not forced to eat at McDonald’s. Is there any certainty that they would make different choices if McDonald’s weren’t there?

It is this kind of shoddy logic that makes Patel’s case for social controls on economic activity so weak. Yes, there is a long history of such controls working successfully, some of which Patel cites. The use of participatory budgeting at the local level is a good example, one that Patel documents in full, starting with the example of Porto Alegre in Brazil. Certainly, companies need increased social responsibility, and this has been one of the themes of corporate governance in the past ten years.

But to jump from there to a facile and illogical condemnation of market economics is a leap from the sublime to the ridiculous. Greed may have brought us the recession, but it will also get us out of it. It may seem incredibly trite to say so—the observation that “money alone sets all the world in motion,” was first made by Publius Syrus in 42 B.C.E. But there is a big difference between truisms and cant, and it is always useful to clear our minds of the latter.

Reviewer Andrew Rosenberg has been a journalist for twenty years at Euromoney, Time, and MSN Money, covering politics, business, and finance. He currently resides in France.

For an extremely clear and balanced account of what caused the financial crisis, and how it unfolded, the reader should refer to the first chapter of The New Paradigm for Financial Markets, by George Soros (PublicAffairs, 2008).