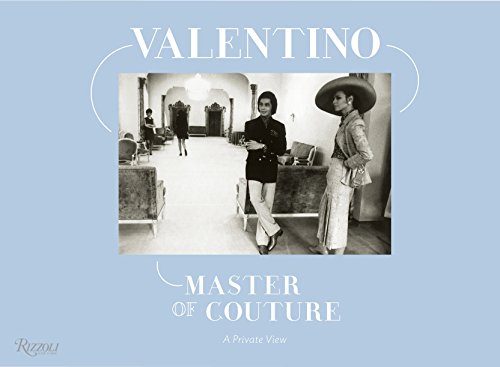 As an avid reader and reviewer of so many fashion books, I would not be remiss in insisting there is little that hasn’t been written, explained, shown, or dissected about the life and career of Valentino Garavani, simply known as Valentino within the world of fashion.

Au contraire, my fellow fashionphiles, as the writers of Valentino Master of Couture: A Private View have bestowed upon us what can only be described as “a catwalk of history, stretching through the golden age of couture and continuing into the present.” These few words sum up the content and context of this mini treasure of a book.

If you are looking for a big coffee table glossy edition, then I suggest you move on, as this is one of the most intimate and visual stories about one of the most legendary and iconic designers of the 20th and 21st centuries.

The book is filled with photographs rarely before seen, mostly in black and white. In size, it is more on the scale of a personal diary rather than the mega volumes we are more accustomed to for fashion designers.

The photographs are compelling and illustrative of the designer, his career, and his life, impressing one with their content rather than staggering size. The very brief text is extremely intelligent and extraordinarily on point; in essence, there is no blah blah blah here, just what you need to know in the least amount of words possible.

The language itself is far more concise yet descriptive than this reviewer has read in many books of this genre that were 10 times more extravagantly presented.

Valentino is the man who inadvertently discovered the true definition of a “lifestyle brand.” He lived it, worked it, and believed in it from day one. Have a look into a well-lived life and find out why he earned the nickname “The Chic” by the fashion bible Women’s Wear Daily.

“Working in a way that is uniquely Italian, Roman couture surpasses another glory of the Italian culture in its craft; la cucina Itialiana. In both, it is the intervention of inspired manipulation that transforms simple, natural materials—whether silk and thread or flour and water—into art.”

On behalf of all those who are involved in fashion on any level: Grazie, Signore Valentino! Thank you for a glimpse into your life and time.