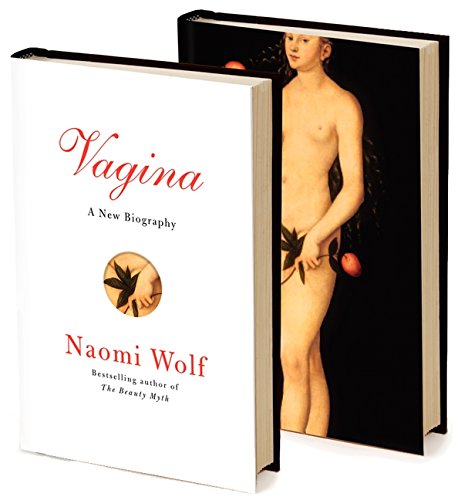 “A matriarchal society looks pretty good from this vantage point.”

In the not-too-distant past Oprah would not pronounce the word vagina on her celebrated show, calling it a “va-jay-jay.”

Hold on to your panties because the vagina is now front and center in Naomi Wolf’s explosive nonfiction book, Vagina: A New Biography. Once this book is nationally circulated myths will implode around this important female organ from which all of mankind springs forth.

Research reveals that all female mammals were designed through the evolutionary process to experience orgasm. This may explain the male need to perform the heinous surgical removal of a woman’s clitoris, which incidentally were also performed in England in the 19th century without benefit of anesthesia.

Apparently the fear of female orgasms interferes with the dogma that women are to remain servile vessels for the male organ.

It turns out that a sexually frustrated woman’s dopamine system diminishes in anticipation of more unsatisfactory sex, and she eventually loses interest (no kidding). The complex neurobiology network coursing through the female clitoris, g-spot, and vaginal pathways is deeply explored here.

To quote Ms. Wolf “dopamine is the ultimate feminist chemical.” She makes this statement because history shows that women who have evidence of optimal dopamine levels are difficult to manipulate or control. The powerful chemical cocktail of oxytocin and dopamine, created during orgasm, actually do contribute to a love addiction in the brain. In other words, the patriarchal fear that if women have sex and know how to enjoy it they will become increasingly libidinous and ungovernable is effectively true.

Why? Because it turns out that the vagina actually is the pathway to creation, exploration, and transcendence.

Ms. Wolf states that the idea of foreplay is only adapted to the male sex-response cycle (here, in a heterosexual union). Given the difference in time it takes female versus male from coitus to climax, this is problematic. Though our ostensibly pro-sex culture seems comfortable with female sexual happiness, the data reveals a dearth in just that.

In one of the sadder points in Ms. Wolf’s treatise, we learn untold instances in which women’s vaginas have been targeted throughout history during wartime as a means of destroying a culture and dominating the people. In fact, targeting vaginas via penetration with sticks and all manner of foreign bodies is a tool of war still deployed today, illustrating again that rape is not a sexual act, but one of violence, power, control. To break a culture you must target their women.

Ms. Wolf also reveals how the brain of a female changes in response to insinuated or actual violence—resulting potentially in a permanent, physical shift for her. The experience of a woman who repeatedly hears insults and feels debased literally and figuratively at the level of her amygdala is akin to experiencing the imminent danger of a sexual assault. A female brain subjected to verbal abuse becomes more reactive, as in the fight-or-flight syndrome. Furthermore, repeated verbal abuse actually makes it more difficult for a woman to attend to her professional and academic tasks.

One of the dirtiest words in the English vernacular is cunt, which is, of course, a way to insult a woman, to shame her.

Modern methods of legislative control of the vagina via restricting birth control methods and trying to rend child birthing stewardship from midwives has become even more pronounced as women gain economic and social power and apparent reproductive independence. Clinical records reveal effects of the horrific ways women would conduct their own abortions; considering the political landscape today, could more of that be so far away?

But Vagina: A New Biography isn’t all sad news, because according to the author, the goddess array is actually true (read the book!), and she presents evidence regarding the efficacy of Tantric lovemaking.

It is interesting to note that the Indian culture (of the Asian continent) spawned this process, yet is presently a very sexually repressed country. (One of my favorite expressions from Ms. Wolf’s book is her repeated reference to her vagina as the “Lotus of her Wisdom.”) Tantric lessons anyone?

There is no better way to end this review than to paraphrase Ms. Wolf: “Original sin did not as the Judeo-Christian tradition has it, originate in human sexuality, but in our species deviation from our earliest tradition for reverence of female sexuality.”

A matriarchal society looks pretty good from this vantage point.