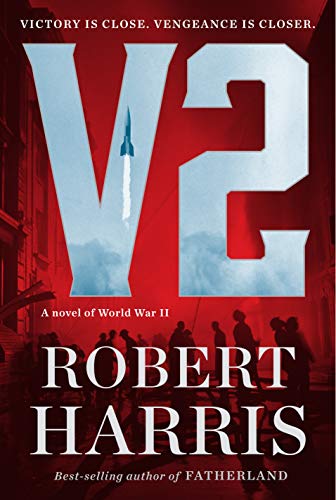 “with its attention to detail and swift narrative, fans of Mr. Harris’ previous historical novels will not be disappointed with this work that really captures the feeling of those last desperate months of World War II.”

Robert Harris’ new novel is another page-turner, this time focused on the last days of World War II and the world’s first ballistic missile, the German V-2. The book is a back and forth tale of the contest between German missile crews bombarding London with the world’s first weapon of mass destruction and the British team trying desperately trying to defeat them.

Mr. Harris is a master of technical and historical detail, as evidenced by his extensive bibliography, and takes the reader effortlessly through several back stories throughout the book that add to the development of the two main characters, a German rocket engineer suddenly having a crisis of conscience and survival, and a British Women’s Auxiliary Air Force officer who is helping the team working to find and attack the German launch sites in occupied Holland.

Conceived and built by a group of naïve German rocket scientists who wanted to invent space travel, the V-2 was one of Hitler’s wonder weapons that would save a rapidly failing Third Reich. Although it in fact had no long-term effect on the war’s outcome, it was the grandfather of all modern ballistic missiles and struck terror in Londoners throughout the last months of the war.

The mood and setting of the time are also excellently capture by the author, from the tension of Londoners digging through the rubble of an attack while wondering where the next missile will strike to the live for today mentality of the German rocket troops who secretly know they are losing the war.

The plot moves at a brisk pace, with the accelerating race between the mortal combatants. When the heroine, Kay Caton-Walsh is offered the opportunity to take a more central role in the war, she swiftly takes it, moving close to the Allied front in Belgium to try and help determine where the missiles are being launched from. The German scientist, Rudi Graf, is trapped between carrying out the seemingly futile missile attacks while trying to avoid arrest by an increasingly suspicious Gestapo. There are some additional secondary plots weaved into the book, all of which get resolved quickly in the final few chapters.

While the plot heads to a seeming crescendo, it almost seems like the author pulls his final punches and rather quickly heads into the somewhat anti-climactic post-script. There are several interesting side stories teased along about the eventual fate of the German rocket scientists as America and Russia rush to secure the remaining V-2s and all the associated plans and materials, including the scientists, but the remainder of the book doesn’t have a definitive conclusion.

Overall, with its attention to detail and swift narrative, fans of Mr. Harris’ previous historical novels will not be disappointed with this work that really captures the feeling of those last desperate months of World War II.