The Vél d'Hiv Raid: The French Police at the Service of the Gestapo 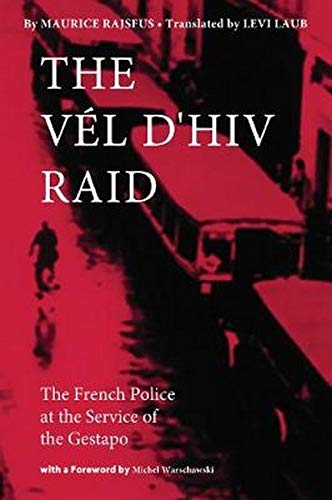 More often than not, when one thinks of the actions taken against the various categories of Europe’s “undesirables” in World War II, it is usually in terms of the Axis: Germany and, to a lesser extent, Italy and some of their Eastern European satellites, Bulgaria, Hungary, and Romania. However, there was another country about which little is known that collaborated and cooperated with Germany (not that it had much choice) in the removal of its Jewish populations.

This would be Vichy France, the entity created by Germany and the French Republic following the latter’s rather swift defeat in the western campaign in the spring of 1940. Although the northern part of the country was militarily occupied, the Vichy government was the ostensible political authority for the entire country until it was fully occupied by Germany following the Allied invasion of North Africa in the fall of 1942.

Consequently, the Vichy government, police, gendarmerie and other security forces such as the Milice, were under the thumb of their German counterparts and, when requested to identify and transport potential laborers as well as those deemed dispensable and unnecessary, required to follow through on any and all requests for human material.

In the case of the Vélodrome D’Hiver raid, stateless and other foreign Jews residing in Paris were chosen for “relocation” to other parts of the Reich. On July 16 and 17, 1942, Vichy forces went to work rounding up, arresting and temporarily incarcerating 13,152 Jews in a nearby camp at Drancy and the sporting facility at the Velodrome until they could then be placed on trains for movement to eastern Europe.

Not only were the French police and security forces complicit in this operation with the Gestapo and SS (and their involvement in this is documented) but they maintained their charges in the Velodrome in the worst sort of inhumane conditions. There was little or no food, water, sanitation, hygiene, or privacy, with some pregnant women giving birth amid the filth and overcrowding. Families also were separated: spouses from each other and older children from parents.

Anti-Semitic feeling on the part of some French citizens and police did not necessarily extend to native French Jews, especially those who were veterans of the First World War, just the stateless from other European countries. There were also, creditably, others who refused to cooperate at their own potential personal risk and even went out of their way to warn, protect many of those on the arrest list, or help them escape the dragnet.

By the same token, there were those Jews who saw the writing on the wall and chose suicide for themselves and loved ones when they were informed of what was happening by friends and neighbors or heard the dreaded early morning knock on their door. It is difficult to imagine mothers throwing their children out of upper floor windows to the pavement below prior to doing so themselves.

Eventually transported, it is not surprising that many of these victims did not survive their experiences in the death camps. This episode represents a stain on the honor of the French nation, with its principles of liberty, fraternity, and equality and, in particular, the French police as it does other complicit nations and peoples.

As a result, two of the country’s recent presidents, Jacques Chirac and Francois Hollande, have tried to reconcile this atrocity with those same ideals, as is evidenced by a speech from each provided as appendices, albeit less than forcefully and as outright apologies if they are any indication.

Other appendices provide the decrees of the superintendent of the municipal police, specifications and organization of the forces involved, materials, reinforcements and the necessary transportation requirements and the texts of two flyers informing Jews of the action and exhorting them to be vigilant. There are footnotes citing sources at the bottom of a respective page, many of which are contemporary newspaper articles and Vichy and German documents.

As a Vél D’Hiv survivor himself, author Maurice Rajsfus has made a point of documenting, what is now effectively a trilogy, the entirety of France’s ill-starred history with respect to its responsibilities regarding Jews and others who suffered in the Holocaust. Lest we forget.